Malaga coach Manuel Pellegrini is 'worried' about the club's immediate future after their 1-0 win over Osasuna on Saturday.

The La Liga side have been banned from entering European competition next time they qualify by UEFA after failing to meet financial requirements, a punishment the club still hope to overturn.

"It would be a shame," Pellegrini told AS when asked about the club's troubles.

"The club's future is not up to me. We'll see what happens in the coming months. It is a subject that is on our minds and continues to keep us worried."

Malaga sit fifth in La Liga, one point behind Real Sociedad, and were grateful to Julio Baptista for his 93rd-minute strike to take the three points on Saturday.

"We played one of our best games of the year and the goal came at the death," Pellegrini said.

"It was difficult to go out of the Champions League (3-2 on aggregate against Borussia Dortmund), but physically and in terms of the football we played, the team responded.

"Julio has had a hard time, and scored a goal. I'm happy for him – he is a very important player for us. Hopefully this will increase his performance.

"I also want to thank the Malaga fans for the emotion they made me feel today. I lack the words to explain it." 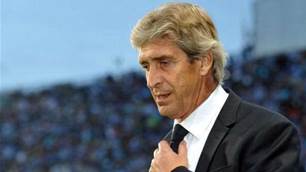 Manchester City an option for Pellegrini