Australia goalkeeper Lydia Williams believes AAMI Park can be a sell-out when the Matildas face China on November 22.

The Matildas recently took on Brazil in back-to-back friendly wins in Sydney and Newcastle which both attracted over 15,000 at the games.

Williams said she certainly sees the women’s game is rising with 25 A-League/W-League double headers during the regular seasons. Now she feels Victorians can upstage the crowds which turned up in New South Wales.

The Matildas then play China in another friendly in Geelong the following Sunday.

“I think the Penrith and Newcastle games surprised all of us, we didn’t really go in with much expectation on the numbers,” Williams said on Wednesday.

“We weren’t sure… they were saying it’s a sell-out but we weren’t quite sure what it is to sell-out an Aussie stadium with Aussie fans.

“I know all of us were overwhelmed with both the numbers and support we got in those games against Brazil.

“Hopefully the momentum drives and it’s just as good, if not better than the Brazil matches.”

It was also announced on Wednesday morning former successful City and Melbourne Victory coach Joe Montemurro would be off to Arsenal.

Williams used the capture of Montemurro and Sam Kerr’s 2017 NWSL Most Valuable Player as examples of how big the women’s game is growing.

“I think the crowds we’ve got with the national team are up there with some of the best in the world now,” she said.

“The drive for getting more players in the W-League and the competition getting better, this is probably the best it’s ever been and the support from the clubs and federations have been phenomenal.

“I think it just shows we can be one of the best leagues in the world.”

The Melburnians were thrashed 4-1 away to Perth Glory in Round 1, but managed to down crosstown rivals Melbourne Victory 1-0 at AAMI Park last Friday.

Williams returned for their win against Victory after missing the first game and was excited to play against the in-form Jets.

“I love playing at AAMI, love playing before the boys, having the support of the fans of both the women and the men,” Williams said.

“To have another double header is great, it’ll be another tough game against Newcastle, they’re undefeated and to go out there and put in a good match is important.”

City new-recruit and Matildas defender Alanna Kennedy admitted the team was still getting to know each other as she described the first game as a “lull”.

Kennedy was busy throughout the game and had a footrace with 15-year-old Kyra Cooney-Cross in the final 11 minutes, taking her down as she managed to get a shot away which was dealt by Williams.

Kate Jacewicz awarded a free-kick and gave Kennedy a yellow card, but the 22-year-old felt a sending off would have been harsh.

“I don’t think I’m lucky to get off at all,” Kennedy said.

“I think it was probably deserving of a yellow card, but it’s my job as a defender to put a striker off. I think the card was enough.” 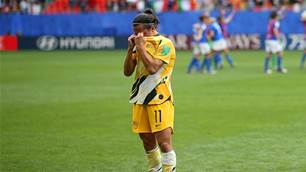