Diawara’s two second-half strikes sandwiched a McGowan header as Adelaide came from behind at Central Coast Stadium to move off the foot of the ladder.

Trailing 1-0 at the break, the pair scored all three of the visitors’ goals in the space of 10 minutes with Diawara improving his tally to four goals in seven games for the Reds.

“He’s fantastic. He’s just come in, he’s starting to get used to us boys and the way play,” McGowan told Fox Sports.

“In the last couple of weeks in training he’s been very, very good and he’s showed that with the goals he’s been getting recently.”

Adelaide’s first away win of the season sees Guillermo Amor’s men leapfrog the Mariners into ninth with three rounds remaining.

“I’d rather keep a clean sheet and the goals we conceded today were a bit sloppy but we’ll take the three points,” the 25-year-old said.

“In the first half we were very poor.

“The second half we pushed up a little bit more, we pressed them a bit more and we got our reward in the end.” 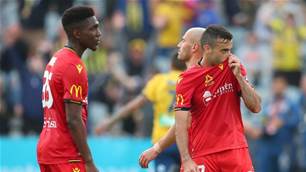