Came close with a free kick from 30 yards. Put Kamau through on goal with a lovely through ball, but the winger was ruled marginally offside. By far the Wanderers’ best player, but often dropped too deep to receive the ball, limiting his influence. Substituted with 15 minutes to play, as Babbel clearly realised the match was lost.

Had a shot early in the match when he should have passed to an overlapping Llorente. Seemed a little lost, didn’t track back enough, and was substituted at halftime.

Given some seriously rough treatment by the Victory defence – including Lawrence Thomas, who collected both the ball and the Spainiard’s head. Riera himself was lucky to get away with an off-the-ball bit of roughhousing on Ola Toivonen.

Missed a sitter on the stretch from six yards, but a marginal offside call spared his blushes. Put through one on one in stoppage time, but hit his shot straight at Thomas.

The rangy youngster was a big upgrade on O’Doherty, and contributed much to the Wanderers’ second half stemming of the navy blue tide. Has a calm assuredness in possession that belies his tender years.

Didn’t offer a lot in attack, but provided the defensive work ethic that Majok was lacking.

The game was long over as a contest prior to his introduction. 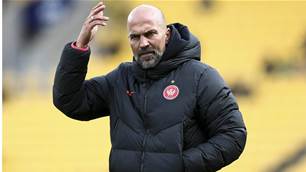