Supporters of Melbourne Victory’s proposed Academy and Community facility - which will support the booming women’s game in the West - say a campaign of lies is trying to derail the proposal.

Maribyrnong Council in Western Melbourne set a deadline for submissions up to today (Friday) before making a decision on August 27 on the proposal.

The proposal is centred around Melbourne Victory’s Academy and Community facility project, and the development of a dedicated sport and recreational facility on the under-used west side of Footscray Park.

The idea is being backed publicly by Matildas and Victory W-League star Laura Alleway, who writes: "We want Footscray Park to be our home, a new base for our team in the heart of the West.

"This will provide a fantastic opportunity to … identify talent and pathways for more young boys and girls."

If the proposal is approved, Maribyrnong Council and Melbourne Victory’s Academy will enter a lease/licence for the site.

The club would not be given the land.

Victory are proposing a 21-year lease, and the lease would be with Melbourne Victory’s Academy (MVFCA) which is a not-for-profit organisation with separate objectives.

Supporters of Victory's proposal have cited historical information dating back to the 1930s and 1940 showing Footscray Park was used for sport.

The A-League club has secured funding of $10 million from the State Government to develop the facility and ‘...ultimately contribute to the overall success of health and wellbeing initiatives in Maribyrnong,’ they write in their proposal.

Backers say, with Victoria's chronic shortage of football facilities, it's vital that proposals like this  in the city's West are given the go-ahead.

They also tell FTBL a campaign of alleged lies and misinformation is in place through the 'Save Footscray Park' group, designed to influence community and council sentiment ahead of the vote. 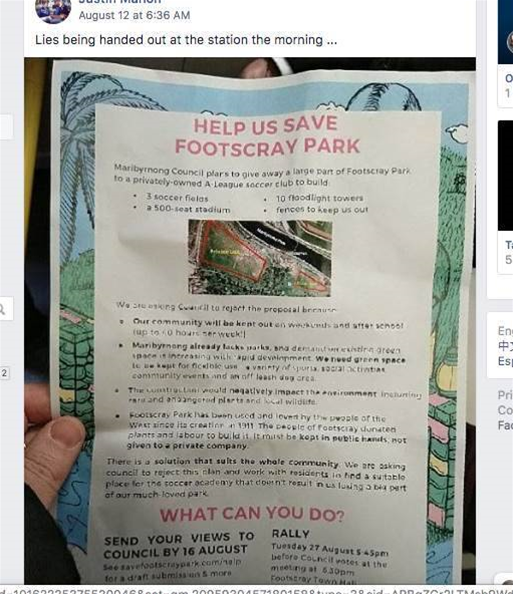 Part of the misinformation campaign, alleges supporters of Victory's proposal in Footscray
Next Page
1 2 Single page