Perth Glory have returned to the summit of the A-League, nullifying a blunt Newcastle Jets side in front of a weather-effected crowd at the McDonald Jones Stadium.

The Glory put on a Popa special, managing a 2-0 win despite facing a barrage of 21 shots and nearly 60% Newcastle possession, in comparison to the Glory’s measly four shots on goal.

In truth, Glory shot stopper Liam Reddy was hardly forced to make a key save all afternoon.

The match began in frantic style, with the Jets spurning an opportunity in the opening seconds, before the Glory rebounded through Chianese, who was subsequently fouled by Glen Moss inside the penalty area.

Moss was at fault again when he failed to collect a loose ball in his six-yard area, before Socceroo hopeful Jason Davidson side footed the bouncing ball into the top of the net.

With the three-points heading out west, Perth Glory and Melbourne Victory continue to bunny-hop each other on the A-League ladder, with the sides next due to meet in February.

Was at fault in both goals conceded. Giving away the penalty in the first minute and flapping at a loose ball for the Glory’s second goal.

Bombed up the right flank before being switched to the left by Ernie Merrick after Hoffman’s introduction. Quality of delivery was generally good, however there were plenty of frustrated crosses in the second half.

Continuously misjudged the ball on a greasy surface and was surprisingly outmuscled by smaller players on multiple occasions. Not a brilliant display.

Subbed out for tactical reasons at 37 minutes. Didn’t play terribly but was not offering enough in attack with Glory sitting deep at times.

Made a good defensive contribution with three key interceptions but contributed nothing in attack.

Similar to Ugarkovic, defensively decent but not good enough in assisting the Jets to penetrate the Glory defensive unit. 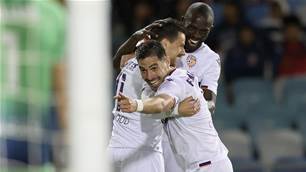 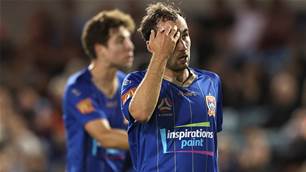