With the FFA Cup Round of 32 draw tomorrow night (Wed), FTBL caught up with the Avondale goal machine in Melbourne.

The 27-year-old (who is also a photographer) is the joint top scorer in the NPL Victoria, but we wanted to chat ‘that goal’ from 2016, one which lead to a famous Cup upset for Gully over Central Coast Mariners in the R32.

Viewers across Australia were off their seats as the theatre of an FFA Cup upset played out in spectacular fashion at Gully’s modest home ground in western Melbourne. 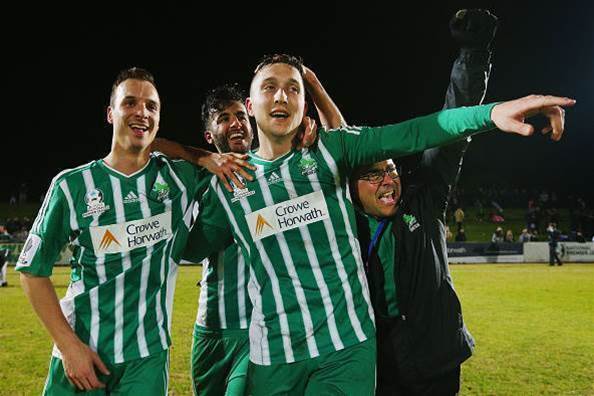 Liam Boland after 'that goal'

Thanks to two late goals, the NPL side triumphed 2-1.

AND SEE THE WILD CELEBRATIONS

LIAM, WHAT WAS GOING THROUGH YOUR MIND AS GULLY WON THE BALL IN TRANSITION?

That season, I made it my job to always have a look to see where the keeper was. And if he was off his line when we were working defensively, I’d be alert to it.

I thought it’d be on against Central Coast and luckily it was the 92nd  minute when I got my chance.

I knew all game that Necevski in the Mariners goal was off his line when we’d won the ball quickly.

And, when we won it back quickly in stoppage time, I used my peripheral vision and saw he was off his line.

I didn’t look up too much as you can see from the footage.

I had a crack and couldn’t have hit the ball better. The ball definitely bobbled and I sort of hit it on a half volley.

I hit it like I was shooting the ball laces out. So I guess that makes it even more special.

When it actually happened, I blacked out a little. The adrenaline was so big.

There’s actually a photo of me running with my fingers in my mouth. I’ve never done that in my life! No idea what I was thinking there.

By the time I got near the dugout, it was pandemonium. We’d had such a tough year, lots of injuries and suspensions for that game.

We were heavy underdogs. But we believed we could do it. And to win like that made it all the more special. And that what you saw in the footage.