The Jets are only set to lose Millar until January 1, however with many of these deals there is an option-to-buy clause inserted that may or may not be publicly revealed.

Millar has starred for Newcastle under Carl Robinson's leadership - scoring four times in 24 appearances last season - after originally joining the Hunter club in a controversial switch after his breakout spell at Central Coast Mariners.

Millar also played for South Melbourne in the NPL, where he drew A-League attention as an already mature player, blazoning a pathway for mature NPL talent.

“With the uncertainty around the date of the league restart, a loan move is a good opportunity for Matty to play games in the short term,” Robinson said.

“It’ll be a great experience for the player to head overseas and challenge himself in England, and it’s a deal which benefits all parties.” 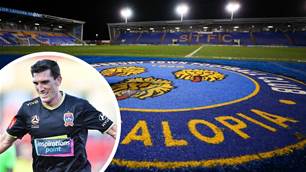