Langerak pulled off two vital saves on the way to a 1-0 win for Nagoya, while Deng was sent off for Urawa late in the day after pulling down Yosuke Kashiwagi.

In Greece, James Jeggo and his Aris teammates continued their fine form to kick off the campaign, with the midfielder’s inch-perfect pass playing in Daniel Mancini to score the winner against 20-time champions Panathinaikos.

And a dramatic finale in Germany’s Regionalliga saw 20-year-old Christian Theoharous subbed on, score and sent off in just 12 second-half minutes.

The fortunes of Mitchell Langerak and Thomas Deng could hardly have been more different in Sunday’s J-League showdown.

While Langerak stood firm in the Nagoya Grampus goal, Deng was arguably a little too much so in his challenge on Nagoya’s Kashiwagi. 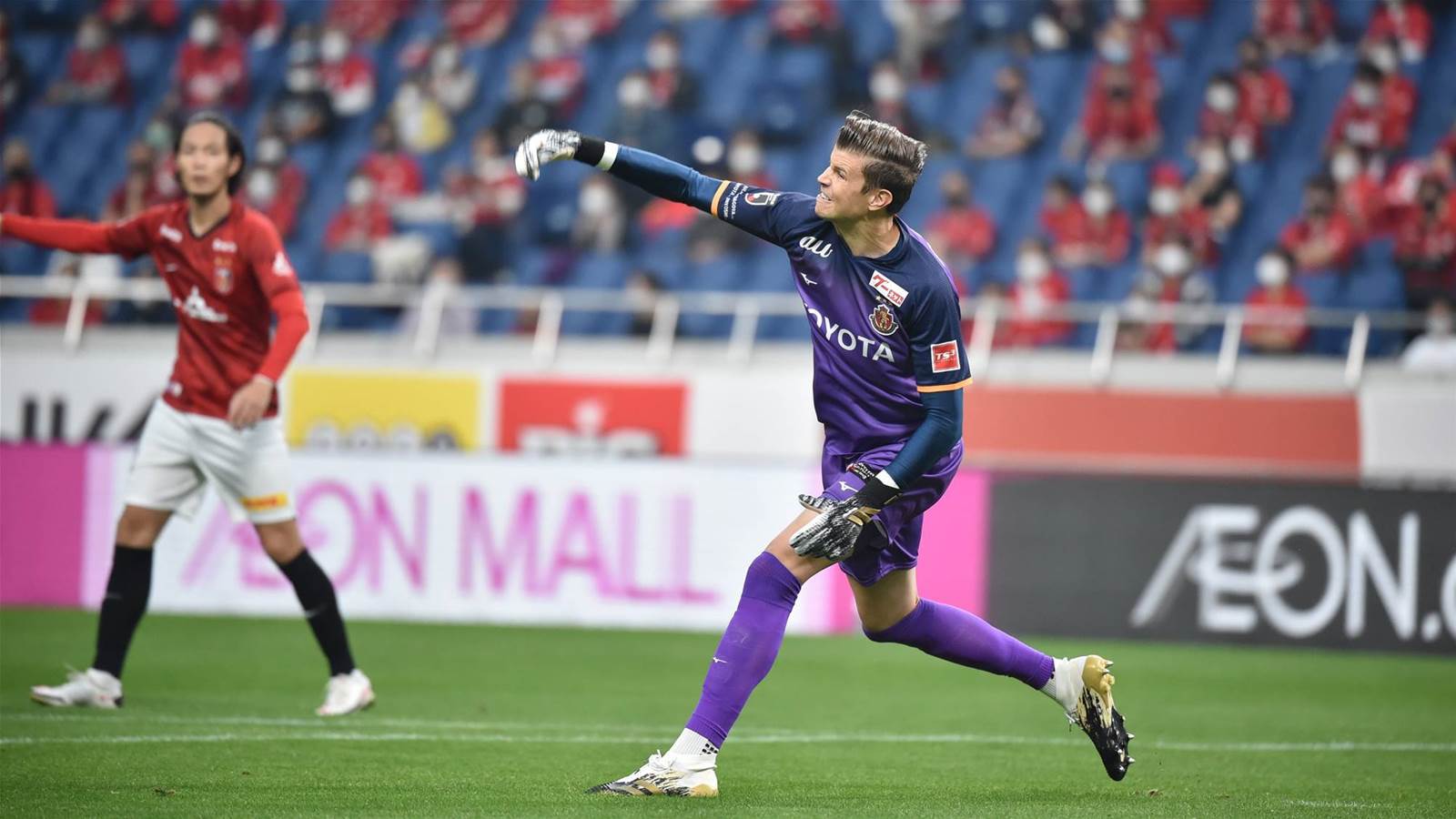 The Kenyan-born Socceroo was shown a straight red card on 85 minutes after pulling back and eventually bundling over the visitors’ number 10. Kashiwagi did go down easily, but Deng being the last man left referee Yusuke Araki with little choice.

Either side of the dismissal were two top saves from Langerak, the first arriving on nine minutes when he brilliantly denied Shinzo Koroki with his left leg from point-blank range.

And then two minutes into stoppage time, a frantic scramble saw the danger cleared after Nagoya’s no. 1 smothered a loose ball before saving the follow up with a great reflex stop.

Grampus move up to fourth spot with the win, six points clear of Urawa in 10th.

Top of the league

Less than two months after joining Greek side Aris, which last won the league almost 75 years ago, James Jeggo and his new teammates find themselves in pole position in the standings.

Aris was already top after three games, but match four presented a challenging trip to former European Cup finalists Panathinaikos – a test that the Thessaloniki side passed with flying colours after a 1-0 win in Athens.

Aussie midfielder Jeggo played a starring role in the win, cutting open the Panathinaikos defence to allow Daniel Mancini to round the keeper and tuck home what proved to be the winning goal.

The visitors could have extended their lead had a couple of penalty shouts gone their way. At the other end Panathinaikos had an equaliser cleared off the line, the build-up of which saw Jeggo put his body on the line by going for a low header which so nearly ended with a boot to the face.

But the score remained unchanged, sending Aris two points clear at the top of the pile. Although third-place Olympiakos – three points behind after drawing at the weekend – do have a game in hand.

Elsewhere in Greece, Apostolos Giannou played the final 17 minutes of OFI’s 3-0 loss at PAOK, in what was the striker’s second appearance since joining the club from AEK Larnaca in Cyprus.

Christian Theoharous only stepped onto the pitch in the 78th minute, with his Borussia Monchengladbach II teammates trailing Alemannia Aachen 2-0.

Less than a minute later, he was already in the referee’s book. But the youngster more than made up for that with a brilliant goal to pull his side back into the game just four minutes after his introduction. 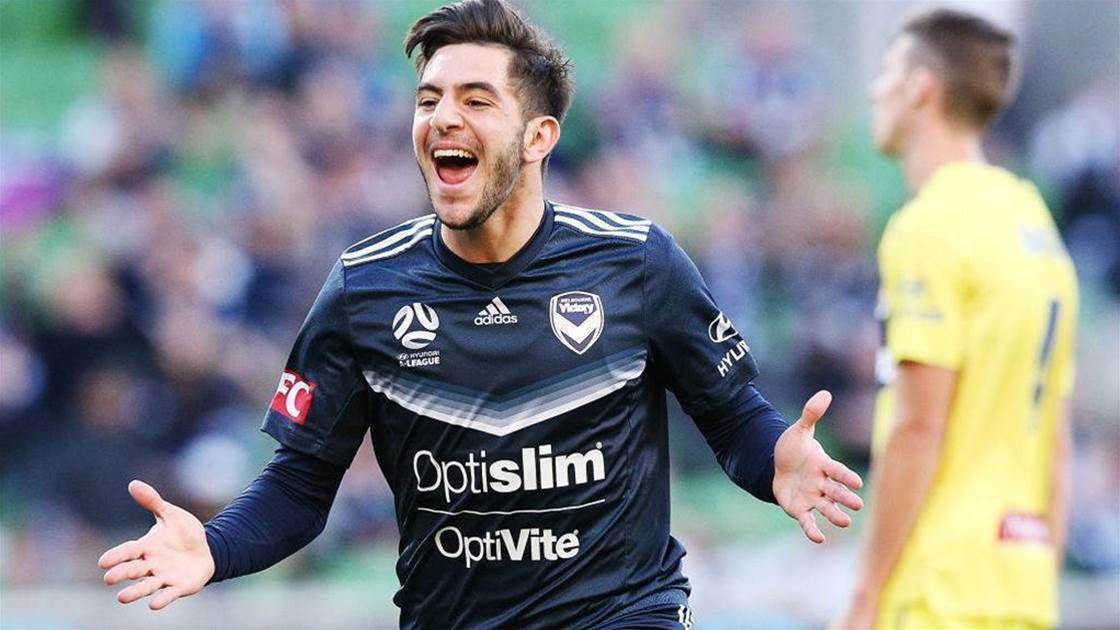 Cutting in from the right-wing, Theoharous beat his man with a stepover before finding space on the edge of the box where he bent in a beauty of a strike to the top left corner.

That made the score 2-1 and offered Monchengladbach II some hope, but in the 90th minute, Theoharous’s dramatic cameo became even more so with a second yellow card earning him his marching orders.

Compatriot Jacob Italiano also featured in the match, starting for Monchengladbach II but being withdrawn on 62 minutes.

And on Sunday in the 2. Bundesliga, Brandon Borello played 67 minutes of Fortuna Dusseldorf’s 2-1 defeat at Holstein Kiel before being substituted. In the top flight, Mathew Leckie missed Hertha Berlin’s 4-3 thriller defeat against champions Bayern Munich.

- Brad Jones is out of the AFC Champions League after Al Nassr lost 5-3 to Persepolis on penalties following a 1-1 draw after extra time.

Hard luck our great fans, 💛
Thank you for our stars! 🙏🏼 pic.twitter.com/mD8TIzcj1s

- Scottish-born Socceroo Martin Boyle starred in Hibernian’s 3-2 win over Hamilton Academical. He was a constant threat down Hibs’ right wing, and it was his run the won the free-kick from which the hosts opened the scoring.

- Celtic’s Tom Rogic played his first minutes of the season, coming on for Olivier Ntcham in the Bhoys’ 2-0 win at St Johnstone.

- Brighton was blown away by a rejuvenated Everton side, as Mat Ryan conceded four goals in a 4-2 defeat on Merseyside.

- Sheffield Wednesday conceded a last-minute equaliser against Massimo Luongo’s former club QPR. Luongo played the whole game and was booked along the way.

- Harry Souttar started once again for Stoke City, although his record of four successive clean sheets was broken in a 1-1 draw against Birmingham City.

- Bailey Wright anchored the Sunderland defence in its 0-0 draw at Charlton Athletic. The points take the Black Cats into fourth in League One, while Charlton had Ashley Maynard-Brewer on the bench.

- There were also wins for Ryan Williams at Portsmouth, after a 4-2 success against a Burton Albion side which had fellow Aussie Ryan Edwards in its line-up, and Aberdeen-born Cameron Burgess in Accrington Stanley’s 2-1 win over AFC Wimbledon.

- Manager Harry Kewell saw his Oldham side score an 89th-minute leveller to take a share of the spoils from a trip to Colchester United in League Two. George Blackwood led the line for the Latics.

- Elsewhere in the division, Thomas Beadling couldn’t prevent his Barrow teammates going down 1-0 at local rivals Carlisle United after playing the full game at centre-back. And Jack Iredale played the last seven minutes of Cambridge United’s 2-0 defeat at Exeter City.

- For the third week in a row Daniel Arzani came off the bench for Utrecht, this time playing the final 10 minutes of a 1-1 draw at home to Heerenveen on Friday night to end the visitors’ 100 per cent record in the Dutch Eredivisie.

- James Holland picked up a first-half booking as LASK went down 3-0 at Rapid Wien in the Austrian Bundesliga.

- Fresh off his Champions League success, Awer Mabil was unable to make the difference for FC Midtjylland on Sunday, coming on as a 60th-minute sub in a 2-2 draw at Horsens in Denmark.

- And in the same division, Lawrence Thomas was between the sticks in SønderjyskE 2-2 draw at Lyngby. He conceded a 90th-minute equalizer along the way.

- Defender Trent Sainsbury played 90 minutes at the heart of Kortrijk’s defence in Belgium during a goalless draw against Kevin Muscat’s Sint-Truiden.

- Adam Taggart couldn’t find the net but played virtually the whole game as Suwon Bluewings won 1-0 against Incheon United and record another valuable win in its battle against relegation from South Korea’s K-League. Terry Antonis remained on the bench.

- In the second tier, Connor Chambers featured in Daejeon Hana Citizen’s 3-2 loss against Chunganam Asan, who move off the bottom of the K-League 2 as a result.

- Anthony Kalik played the first half of HNK Gorica’s 2-1 win over Hajduk Split in Croatia’s top tier, which moves his team level on points with table-topping Dinamo Zagreb.

- Also in Croatia, Deni Juric was unable to find the back of the net as Sibenik went down 2-0 at home to Osijek in Croatia’s top flight. Sibenik is now bottom of the table.

- And Croatian-born Fran Karacic played a full game for Lokomotiva Zagreb in a goalless draw with Istra in Croatia’s top tier. The midfielder picked up a booking just after the restart.

- For the second game in a row, Joey Gibbs failed to score for Iceland second-tier side Keflavik in its 2-1 win over Leiknirv Faskruds. That’s now the 21-goal forward’s longest barren spell of the season so far.

- While James Jeggo was guiding Aris to victory in Greece, brother Luc was an unused substitute for Bryne in a 1-0 win over Rosenborg II in Norway’s second tier.

- In Italy, Gabriel Cleur was an unused substitute for Virtus Entella in a 2-0 loss against Reggiana in Serie B, as was Alberto Del Grosso for Lecco in a 2-2 draw at Livorno in Serie C.

- Brad Smith got another run out for Seattle Sounders in the MLS, coming on for the last 17 minutes in a 3-1 win over Vancouver Whitecaps, for whom Andy Rose played the first 65 minutes.

- Antonee Gilroy played 79 minutes for Tacoma Defiance in its 1-2 loss against Reno 1868 in the USL Championship.

- Forward Lachlan McLean scored the opener in Greenville Triumph’s 2-0 win over Orlando City B to send his side top of the USL League One table. Meanwhile, defender Joshua Phelps and his Tormenta teammates went down 3-0 at second-place Union Omaha. Phelps played the whole match.

- Goalkeeper Yaren Sozer was on the bench for Erokspor’s 1-0 loss against Batman Petrolspor in the Turkish 3. Lig.

- Joe Faux was subbed off on 52 minutes of Cefn Druids’ 5-0 defeat at home to Connah’s Quay in Wales.

- 21-year-old Pierce Waring was an unused substitute for Cerezo Osaka II in a 0-0 stalemate against Imabari in Japan’s third division.