The Olyroos made it to the the AFC U23s Championships in Thailand in January after it was confirmed they finished the qualifiers as the top-ranked second place team.

Australia had a nervy few hours after they held out for a draw with South Korea earlier while they awaited the results of the other matches in the Cambodia-based tournament.

Only the top four second-placed teams qualified for the Championships based on goal difference against the teams finishing first and third, with the result against the fourth-placed team ignored.

Australia's +6 goal difference ensured the Olyroos had done enough and are now one step closer to qualifying for Tokyo 2020 if they finish among the top three team at the AFC U23s Championships in January.

This morning coach Graham Arnold hailed the first half performance in a match which drudged to a halt late in the second half when both sides appeared to settle for the 2-2 draw after Korea equalised.

“Over the whole tournament I couldn’t be prouder of the boys,” said Arnold. “They have been away together for 16, 17 days and they haven’t really had a day off, they’ve worked really hard and I am very proud to be their coach.

“I thought the first half was clearly one of our best halves of football. When you are a new team and you are in a new environment, you play in bits and pieces and it is difficult to keep everything at a high standard for the full 90 minutes.

“I thought our first 55 minutes was outstanding, and we’ve achieved the purpose of the trip which was to advance through to the next phase in Thailand."

Roar attacker Nicholas D’Agostino was named man of the match for his brace of goals. The 21-year-old explained that he felt the team’s pre-camp in Malaysia helped Australia secure its ticket to Thailand.

“We wouldn’t have played this well if we didn’t have the camp in Malaysia before we came,” D’Agostino said.

“All the boys needed to come over that week earlier and acclimatise to the heat and humidity, and Malaysia allowed us to do that.

“We put on some great performances.". 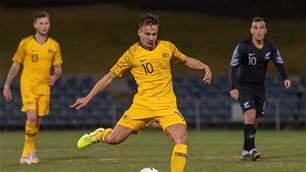