Sturridge joins the Glory after a long playing career in Europe, the majority of it having been in the Premier League.  The 32-year old forward started his senior career in February 2007 with Manchester City, making his debut as a substitute against Reading.

After three seasons with City Sturridge moved to Chelsea Football Club in 2009 for a final fee of $15 million.  Sturridge would go on to win the Premier League, the Community Shield, two FA Cups and his first UEFA Champions League with Chelsea.  He spent some time on loan with Bolton Wanderers in 2011.

Sturridge then joined Liverpool Football Club in January 2013 for an undisclosed fee in the region of £12m according to the Guardian.  He would remain with the team for six and a half years, with the exception of a on loan to West Bromwich in 2018.  The forward left Liverpool FC in the summer after having won his second UEFA Champions League in 2019.

He then played with Super Liga Side Travzonspor in 2019-20.  In total Sturridge joins Glory with more than 300 club appearances in England, Turkey and Europe, having scored over 100 times including 77 Premier League goals.

At the international level, Sturridge has represented England and Team GB.  He was part of the English squad at both the 2014 FIFA World Cup and 2016 UEFA European Championship. He attended the 2012 London Olympics with Team GB.

Speaking of the move to Perth Sturridge said:

"It’s a fantastic opportunity to try a new challenge," he said.

"When the opportunity came about, it felt like the right thing to do, to take my talent somewhere where I can enjoy my football in a competitive league and try and help the team be as successful as they possibly can be.

"I’m going to put my best foot forward, work hard and try and help the team win each game that comes by and then we’ll see where we end up when the season finishes.

"I can’t wait to play at HBF Park and hopefully put a smile on a lot of faces."

The Chairman and Owner of Perth Glory Tony Sage spoke of the significance of signing a player of Sturridge's caliber:

"Daniel is undoubtedly one of the biggest signings not only in Glory’s history, but in the history of the A-League," he said.

"His arrival signals in no uncertain terms how determined we are to bring sustained success to the club and the lengths we will go to in order to achieve that goal.

"We know the elite-level quality Daniel will bring to the side and are hugely excited to see him wearing the famous purple this season."

Sturridge's contract is for the 2021-22 season A-League Men's season. 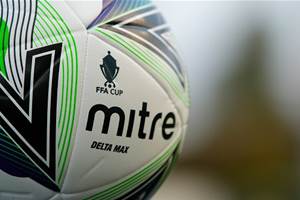 Jonathan Aspropotamitis believes Perth Glory can challenge for the A-League title this season.