Melbourne City have thrown away a golden opportunity to clinch a second A-League Men premiership, stunned 2-0 by wooden spooners Perth Glory to keep Melbourne Victory and Western United in the hunt for top spot.

A win would have delivered City's second premiers plate in as many seasons, after Western United slipped to a 1-1 draw with Newcastle Jets.

But they were left shell-shocked on Wednesday when Callum Timmins handed Glory the lead with a wonderful, dipping long-range strike in the fifth minute.

Liam Reddy with a HUGE save 🔥

The @PerthGloryFC custodian did everything to ensure his side went to the sheds in front!

He then doubled it with a skidding effort in the 67th, to snap Perth's 16-game winless run and end their tough season on a high at HBF Park.

City skipper Scott Jamieson lashed the result, which he said was "hammered home" by Curtis Good being sent off for a second yellow card offence in the 94th minute, and with it earning a suspension for the final round.

"It was in our hands and we stand here and it's still in our hands," Jamieson told Paramount Plus.

"But regardless of that, we can't be playing like that. That's not our standard, that's not our style and it needs to be better and people need to be held accountable."

The reigning champions City, on 46 points, are just a point and goal difference ahead of Victory and United.

They will have to wait for Victory to play Sydney on Saturday and United to face Adelaide on Sunday before facing Wellington on Monday.

"Obviously there's going to be some frustration and disappointment," coach Patrick Kisnorbo said.

"We're going to be positive and the positive thing is that still things are in our own hands."

City were coming off their Asian Champions League group stage exit, having flown to Perth directly from Thailand but Kisnorbo was confident they weren't tired.

Perth landed their lead when Antonee Burke-Gilroy burst down the right then cut the ball back for Timmins, who pulled off a wonderful finish.

From there, City peppered the Glory goal without reward.

In the 37th minute, Jamie Maclaren hit the post, while Liam Reddy pulled off a big save to deny Rostyn Griffiths just before half-time.

Liam Reddy with a HUGE save 🔥

The @PerthGloryFC custodian did everything to ensure his side went to the sheds in front!

Mat Leckie lashed the crossbar in the 62nd, while Maclaren headed wide in the 64th.

City goalkeeper Tom Glover got down low to the ball and should have saved it but somehow let it slip through his fingers for Perth's second.

It's TWO for @PerthGloryFC 🤯

Tonight's opportunity to seal the Premiers Plate is well and truly slipping away from @MelbourneCity!

"Obviously, very proud of the boys. They executed the game plan really well and it was well deserved," interim coach Ruben Zadkovich said.

"There's a lot of guys in that dressing room that have had a really tough season for a whole lot of reasons.

"But to be that resolute at the end of all of that tells me everything I need to know. So I'm extremely proud of them." 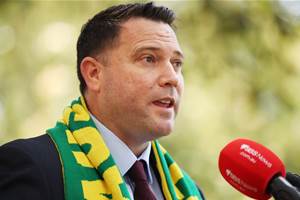