BRISBANE Roar coach Ange Postecoglou is focused on tomorrow night's Asian Champions League fixture against Ulsan Hyundai at Suncorp Stadium as his team look for their maiden win in the competition.

Unbeaten in their past seven outings, Roar and Postecoglou are unfazed at the prospect of playing the crucial ACL game followed swiftly by the A-League Grand Final in such a tight timeframe.

Roar dominated the April 4 match between the two teams but failed to find the decisive second goal in the 1-1 draw after playing almost the whole second half with 10 men following Matthew Jurman's red card in the 46th minute.

"We've certainly shown our intent to win every game we play and Ulsan are a good side," Postecoglou said. "They've started the K-League really well, they're right up there.

"All the teams in our group have started their seasons really well and we're chugging along alright ourselves so it's a pretty even group.

"We're expecting another good quality game, they'll come at us but we're at home and we still expect to be able to peg them back and hopefully dominate the game."

Jurman will miss the match but the Brisbane defence will be boosted by the return of Mohamed Adnan.

The Bahraini defender sat out of the last AFC Champions League game after collecting two yellow cards in the opening two matches.

Also confirmed to play against the K-League club is prolific striker Besart Berisha.

The former Arminia Bielefeld man has scored 19 goals in the domestic campaign this season but is yet to break his duck in the Asian competition.

"He had a run on his own yesterday (Sunday) and trained with the boys this morning," Postecoglou said.

"We would have preferred him to train all week but he's obviously been under the weather. 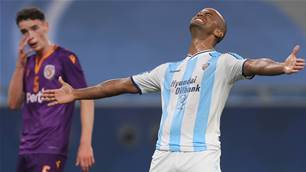