Brisbane Roar have jumped to top spot in the A-League with a comfortable 3-1 win over Adelaide United, their third victory on the bounce.

Dylan Wenzel-Halls has propelled Brisbane Roar to the top of the A-League, scoring an excellent brace in an impressive 3-1 win over Adelaide United.

The young forward snared his brace in the 78th minute, before Adelaide's Nathan Konstandopoulos pulled back a goal four minutes later.

The win, Brisbane's third on the bounce, drew them level with Central Coast - who play on Sunday evening - on points and goal difference but ahead on goals scored.

Adelaide had a nervous start when goalkeeper James Delianov was forced to save teammate Jordan Elsey's own-goal-bound header after just six minutes.

Jack Hingert whipped a cross into the near post with Wenzel-Halls attacking the ball hard to head home.

Then, in the 45th, Brisbane struck again, with O'Shea ripping a tremendous long-range strike into the top corner.

Wenzel-Halls was everywhere throughout the match, firing wide in the 76th minute and earning his brace just two minutes later.

The young gun cut around Elsey and cracked a dipping shot towards Delianov, who fumbled the ball through for a goal.

Adelaide then snared a late consolation goal when Konstandopoulos lashed home a low strike from distance.

There was a silver lining for the Reds, with young gun Al Hassan-Toure returning from a long stint on the sidelines as a second-half substitute. 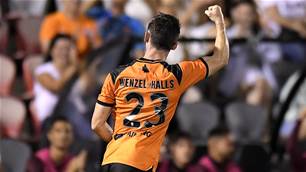