Tom Rogic showed glimpses of being back to his best for Celtic in a dramatic draw in the Scottish Premier League this weekend, while Kevin Muscat stopped the rut in Belgium and Aaron Mooy played a key role in the cup for Shanghai SIPG.

Rogic, who has played a peripheral role for the Bhoys so far this season, was back in the starting line-up after impressing against Milan in the Europa League last week, and he duly delivered with a pair of assists.

So too did Kevin Muscat have something to shout about, ending a run of eight Belgian Pro League games without a win as coach of Sint-Truiden.

De Kanaries won 2-0 against Standard Liege to move five points clear of the relegation play-off spot and ease the pressure on the former Melbourne Victory boss.

And Aaron Mooy won a penalty for Shanghai SIPG, helping take the cup tie with city rivals Shanghai Shenhua to extra time where he later converted a spot-kick to help his side progress.

It’s been an unsettled season for Tom Rogic so far, amid transfer speculation and fitness struggles.

Off the pitch, the 27-year-old looked set to leave Celtic, with manager Neil Lennon confirming the club had at one point accepted a bid from a club in Qatar.

And on the pitch – well, that wasn’t even a part of the equation, really, with the midfielder stuck on the bench more often than not this term. 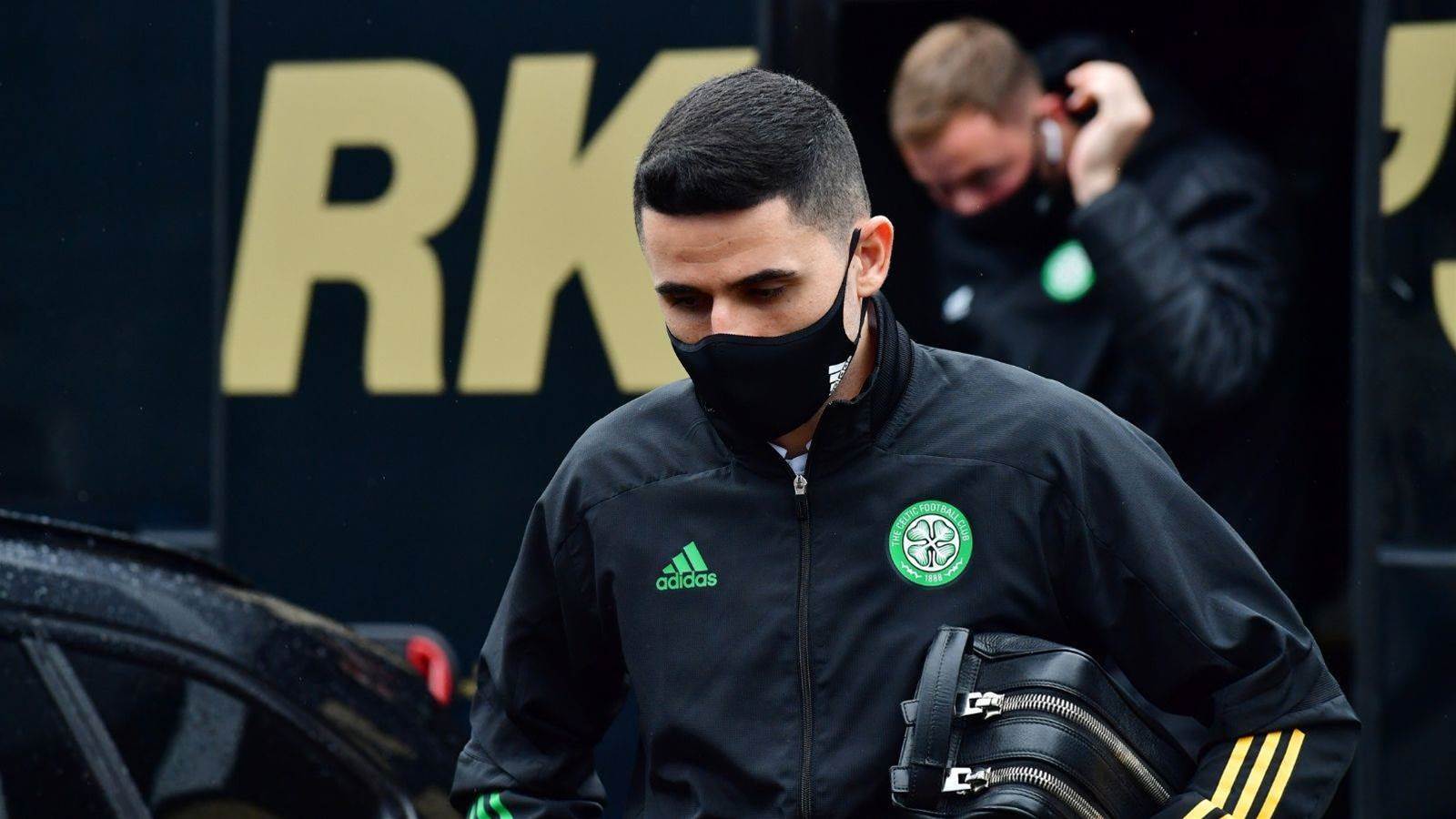 Tom Rogic has played a bit-part role for Celtic so far this season, but made an impact against Aberdeen on Sunday

But after a solid showing in the 3-1 defeat to Milan in midweek, Rogic was back in the starting XI for the trip to Aberdeen on Sunday, and in the second-half showed he can still make the difference when he fed Callum McGregor to draw Celtic level at Pittodrie.

And 24 minutes later he was at it again, this time teeing up Leigh Griffiths to equalise for the Hoops once more.

Celtic then took the lead from a penalty, only to be pegged back in stoppage time, but Lennon singled out Rogic for praise in his post-match comments.

“I hope he stays fit because I thought he had a cracking game. I thought he played with real desire and hunger.”

Rogic’s season has nothing on Kevin Muscat’s, though.

In his first management gig outside of Australia, the 47-year-old had guided Belgian outfit Sint-Truiden to just one win from nine league games, including a run of three points from a possible 24 and 11 goals conceded in the last four games. 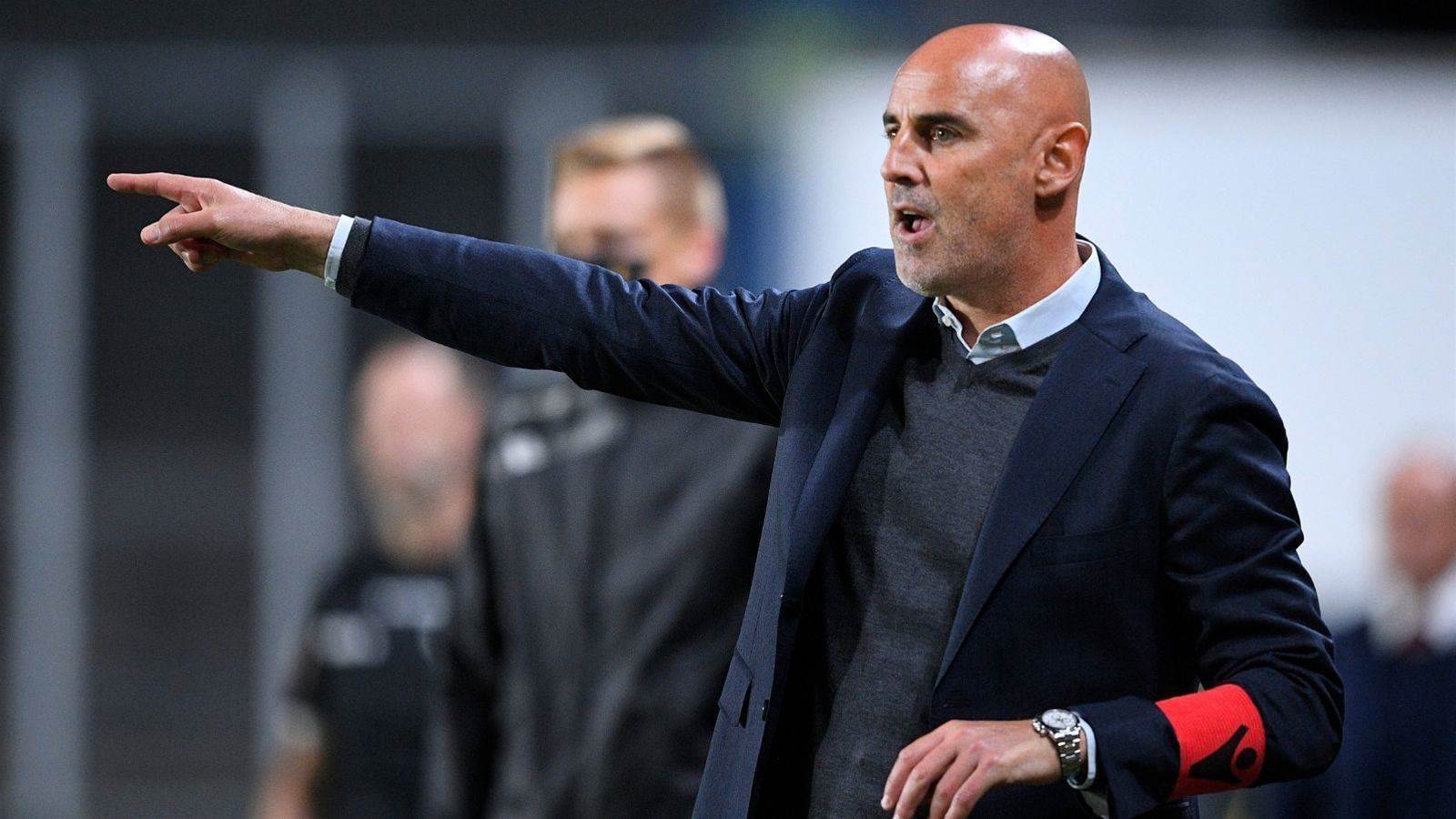 Kevin Muscat has had a difficult start to life in Belgium

But that run of form was halted on Sunday as he oversaw his side's 2-0 win over 10-time league champions Standard Liege.

Duckens Nazon, starting his first league game for the club since August 2018, opened the scoring for Sint-Truiden on 37 minutes.

And Steve De Ridder, who had also played a bit-part role at the club prior to Muscat’s arrival, sealed the victory with a second on 73 minutes.

The win gives the Canaries some breathing space, moving five points clear of the relegation play-off place and into 14th in the 18-team division.

Next up is a trip to bottom-placed side Excel Mouscron, without a win in nine league games, on Sunday.

It can be difficult to stand out in a line-up boasting the likes of Hulk, Oscar and Marko Arnautovic – but Mooy gave his superstar teammates a run for their money on Friday in the second leg of Shanghai SIPG’s cup tie with Shanghai Shenhua.

After a goalless draw in the first leg last week, Mooy and his teammates knew they would need to find their scoring boots.

And it was the Australian who took the initiative, bursting through from midfield to win a penalty, which Hulk promptly scored and which, for a long time, looked like it would be enough to send the hosts through to the next round.

But a 91st-minute leveller drew Shenhua level, forcing the game to extra time and, eventually, penalties.

This time Mooy didn't need to win one but still did his part in converting the second spot-kick of the shoot-out. And with goalkeeper Wei Chen saving Giovanni Moreno’s effort, that was enough for Shanghai SIPG to book its spot in the semi-finals of the Chinese Super League cup.

Only Jiangsu Suning, the team occupying second place in the Chinese Super League Group A, now stands in the way of a spot in the final.

- Stoke City’s climb up the Championship table continued on Saturday as Harry Souttar featured in a 3-2 win over Brentford. The Potters are now unbeaten in seven games in all competitions.

- Portsmouth’s Ryan Williams secured the bragging rights over Sunderland’s Bailey Wright, as the south coast side won 3-1 at the Stadium of Light. The win takes Pompey one place above their opponents and into fifth place in League One.

- Callum Elder was booked as Hull City slipped to a second defeat of the League One season, losing 2-1 at home to Peterborough United. The visitors leapfrog the hosts into second spot in the table.

- Goalkeeper Ashley Maynard-Brewer was an unused substitute in Charlton Athletic’s 2-0 win at Northampton Town. As was Ryan Edwards for Burton Albion in a 1-1 draw with AFC Wimbledon.

- There was a yellow card for Jack Iredale for Cambridge United in League Two. However, his side at least secured a point against Bolton Wanderers to move into second place.

- While Martin Boyle had a rare off day for Hibernian in its 1-0 win over Livingston, there was a goal for Willam Baynham in Scotland’s fourth tier. The 23-year-old opened the scoring after just five minutes in a 2-0 victory against Albion Rovers.

- Meanwhile, Aaron Lennox played the full game for Montrose in a 2-2 draw at East Fife in Scotland’s League One.

- Mathew Leckie was an unused substitute for Hertha Berlin in a 2-1 defeat at Red Bull Leipzig. The Berliners have one win from five games and are just a point above the danger zone.

- Also unused was Ajdin Hrustic, who is still waiting to make his debut for Eintracht Frankfurt after joining the club from Groningen last month. Frankfurt was battered 5-0 by a rampant Bayern Munich with a hat-trick from, you guessed it, Robert Lewandowski.

- In the second division, Brandon Borello played the last 19 minutes of Fortuna Dusseldorf’s 3-0 loss at Hannover 96, leaving the club in the relegation play-off place after four games.

- And John Iredale played the full game for Wolfsburg II in a 2-1 loss to Werder Bremen II in the Regionalliga.

- Daniel Arzani was again named as a substitute for FC Utrecht, but this time did not get any game time as his side won 2-1 at FC Twente in the Eredivisie. He is yet to make his full debut since joining on loan from Manchester City.

- The Lambert twins made life difficult for commentators when both Ryan and Declan were introduced on 65 minutes in Den Bosch’s 1-0 loss to Excelsior in the Dutch second tier. Excelsior scored a 94th-minute winner to secure the three points.

- Trent Sainsbury played a full game in defence as Kortijk lost 3-1 to Belgian giants Anderlecht in the Pro League on Friday evening.

- Lawrence Thomas and Nikola Mileusnic faced off in Denmark’s Superliga, with Thomas’ SønderjyskE beating Mileusnic’s Randers by two goals to one. SønderjyskE had to play more than an hour with ten men after a sending off, but remain top of the table with the win.

- There were no run-outs for Portuguese-based trio Danny Choi, Samuel Silvera and Anthony Carter on Saturday. Choi and Silvera remained on the bench for Casa Pia’s 2-2 draw with Vilafranquense, as did Carter in Academico Viseu’s 1-0 win against Benfica B.

- Apostolis Giannou started his first game for new club OFI in Greece’s Superleague but was on the losing end in a 1-0 defeat to Asteras Tripolis. He was withdrawn after 66 minutes; seven minutes later, his side went behind.

- Olbia remains without a win in Italy’s Serie C this term, although Rome-born Nicholas Pennington did help his side earn a point in a 0-0 draw with Pro Vercelli at the weekend.

- In just his fourth game for the club, defender Ante Bakmaz scored for Comuna Recea in a 3-2 win against Aerostar Bacau in Romania’s second tier.

- Luc Jeggo remained on the bench in Bryne’s 1-0 win at Vard in Norway’s second tier.

- There were wins across the board for Aussies in the J-League. Nagoya Grampus beat Vegalta Sendai 1-0 with Mitchell Langerak keeping a clean sheet, while Thomas Deng was a substitute in Urawa Red Diamonds’ 3-1 win over second-place Cerezo Osaka. And Ange Postecoglou coached Yokohama F Marinos to a 4-0 victory over Tokyo on Friday.

- In the second tier, Jason Geria made his 13th start of the season for JEF United in a 1-0 loss at league leaders Avispa Fukuoka.

- After picking up a booking on 55 minutes, defender Rhys Williams made amends by opening the scoring for Al Qadsiah against Damak in Friday’s Saudi Arabia Pro League clash. Williams’ side went on to win 2-1 to claim a first win of the season.

- Elsewhere, Craig Goodwin played 85 minutes as he helped his new Abha Club teammates earn a point in a 1-1 draw with Al Hilal. And Al Wadha’s Dimitri Petratos was unable to replicate last week’s goalscoring form in a 1-0 loss to pacesetters Al Ahli.

- In the top of the table Qatari Stars League clash, Shane Lowry was on the end of an extraordinary defeat for Al Ahli. Having won all four of its opening games and conceded just once, Al Ahli lost 7-1 to Al Sadd, which moves into top spot and remains unbeaten as a result.

- Spanish-born midfielder Isaias played a full game for Al Wakrah in a 2-2 draw with Al Arabi in the same division.

- Adam Taggart and Terry Antonis were both named as substitutes in Suwon Bluewings 2-1 loss to Seongnam in the K League relegation round on Friday. Taggart came on for the final 19 minutes and had a chance at an equaliser, but his curling shot from range sailed high and wide.

- Just four points behind Suwon at the foot of the standings is Incheon United, for whom Rashid Mahazi played the final 11 minutes in a 2-1 win over Busan Ipark.

- And in the second division, Connor Chapman again played a full game in the heart of Daejon Hana Citizen’s midfield. His side won 2-1 at Jeonnam Dragons to leapfrog its opponents into third place.

- Kearyn Baccus remained on the bench as Kaizer Chiefs got off to a losing start in South Africa’s Premier Division, losing 3-0 at home to last year’s champions Mamelodi Sundowns.

- Andy Rose played the final moments of Vancouver Whitecaps’ 2-1 win over San Jose Earthquakes in the MLS, coming on in second-half stoppage time.

- Lachlan McLean bagged his seventh goal in 16 league games, scoring the third in Greenville Triumph’s 4-1 win over Orlando City B to extend its lead atop the USL League One. And Joshua Phelps was subbed off on 51 minutes after starting in Tormenta’s 2-1 defeat at North Texas.

- In his first game for the club since joining on loan from Beijing Renhe, Daniel Wong played the last 28 minutes of Nei Mongol Zhongyou’s 3-1 win over Suzhou Dongwu in China’s League One.

- And Martin Lo remained on the bench in Hai Phong’s 3-2 win over Nam Dinh in Vietnam’s top flight. Hai Phong leapfrogs its opponents and is now four points clear from the bottom of the pile.