Deni Juric stepped out of his brother Tomi’s shadow with a brilliant hat-trick in Europe this weekend, while Trent Sainsbury also found the net in a 10-goal thriller and Mat Ryan justified his return to Brighton’s starting XI.

The younger of the Juric siblings became the first in the family to register a professional treble, netting three goals in Sibenik’s 3-1 win over Varazdin in Croatia – the first of which was a Tim Cahill-esque strike that looped over the keeper into the far corner.

Meanwhile, defender Sainsbury was also on the scoresheet for Kortrijk in Belgium, scoring an equally impressive goal of his own in the 94th minute to rescue a point in a sensational 5-5 draw.

And Mat Ryan kept a clean sheet on his return to the Brighton and Hove Albion starting XI after last week being relegated to the bench.

While Tomi Juric was winning his 41 Australia caps, his younger sibling Deni was treading a rather different path, plugging away in Croatia’s second division before eventually signing with top-tier side Sibenik in July.

But on Saturday the 23-year-old managed something his older brother never has when he quadrupled his tally for his new club with an expertly taken hat-trick.

His first echoed Tim Cahill’s brilliant strike against the Netherlands at the 2014 World Cup, which in turn drew comparisons to the legendary Marco Van Basten.

Juric’s effort may not have been hit first-time, but the angle from which he found the net and the dip he got on his on-the-turn half-volley was every bit as good.

He tapped home a squared pass for his second before sealing the treble with a dipping effort from distance, inflating his tally for the season to four goals in ten games.

The win takes Sibenik up to fifth in the 10-team table, in what was the newly-promoted side’s third win in four league games.

Not to be outdone, Trent Sainsbury got in on the act with an excellent strike of his own to cap off an incredible 5-5 draw for Kortrijk in Belgium.

A see-saw game saw the defender and his teammates take a two-goal lead inside eight minutes, before going 3-2 behind, scoring twice to regain the lead and then conceding twice more to trail 5-4.

But in the 94th minute, Sainsbury got on the end of a free-kick into the box, beautifully taking the ball down on his chest before lashing home into the top right corner. 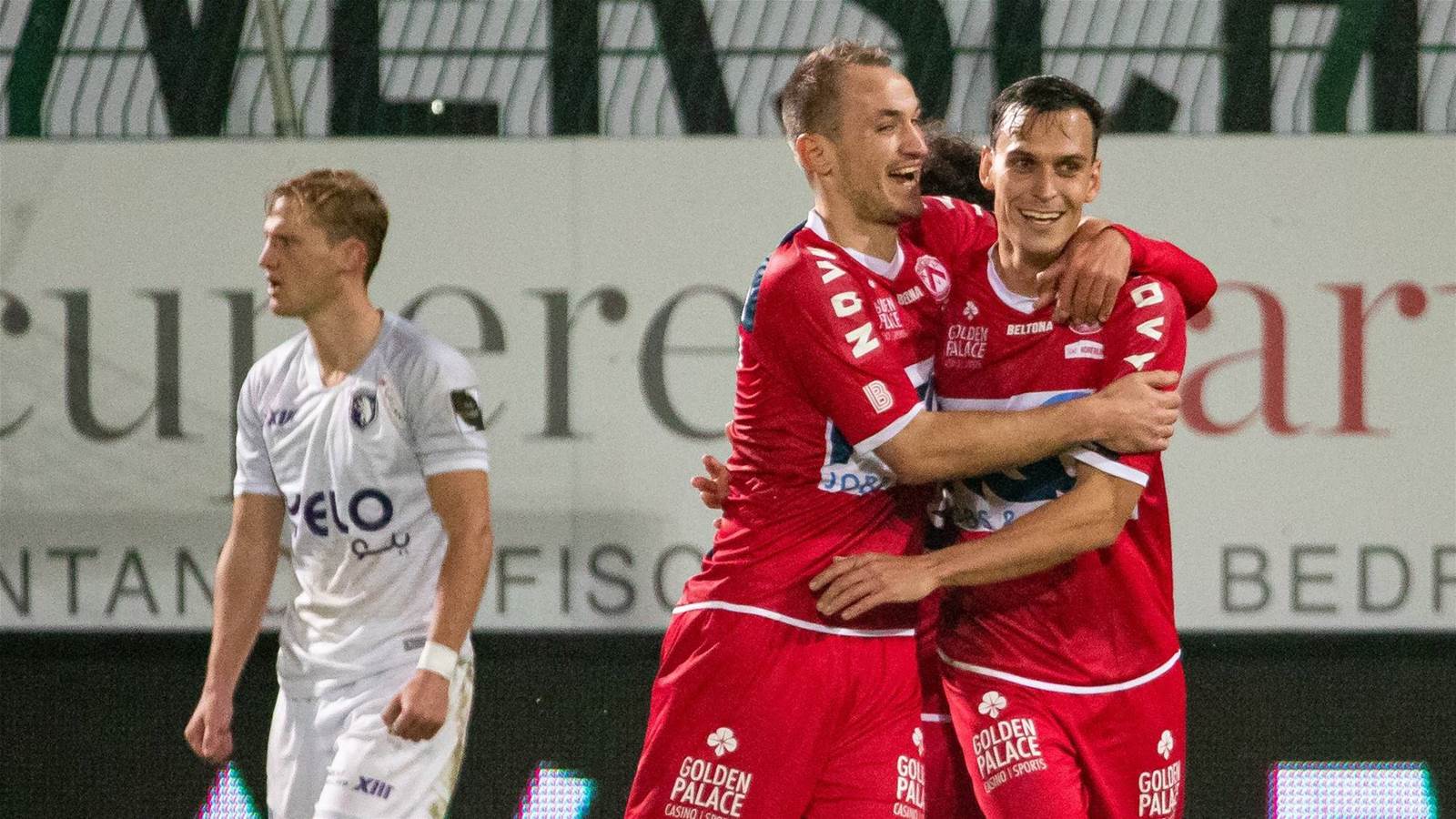 It was the defender’s first goal for his new club, with whom he signed from Maccabi Haifa in August, and takes Kortrijk into ninth place in the Belgian Pro League.

Elsewhere, Kevin Muscat’s Sint-Truiden side lost 2-1 to Genk, which had veteran shot-stopper Danny Vukovic between the sticks.

Last week saw Mat Ryan miss his first Premier League game in almost two years when he was dropped to the bench for what manager Graham Potter described as “tactical” reasons.

But on Friday night UK time, the 28-year-old was restored to the Brighton team sheet and rewarded his manager’s faith by keeping his second clean sheet of the Premier League season in a goalless draw with Burnley.

The 59-cap Socceroo was, in truth, rarely tested by the visiting attack with Brighton having the better of the game. But aside from being nearly caught out on a speculative cross that hit the bar in the opening minutes, he was generally in the right place at the right times when needed. 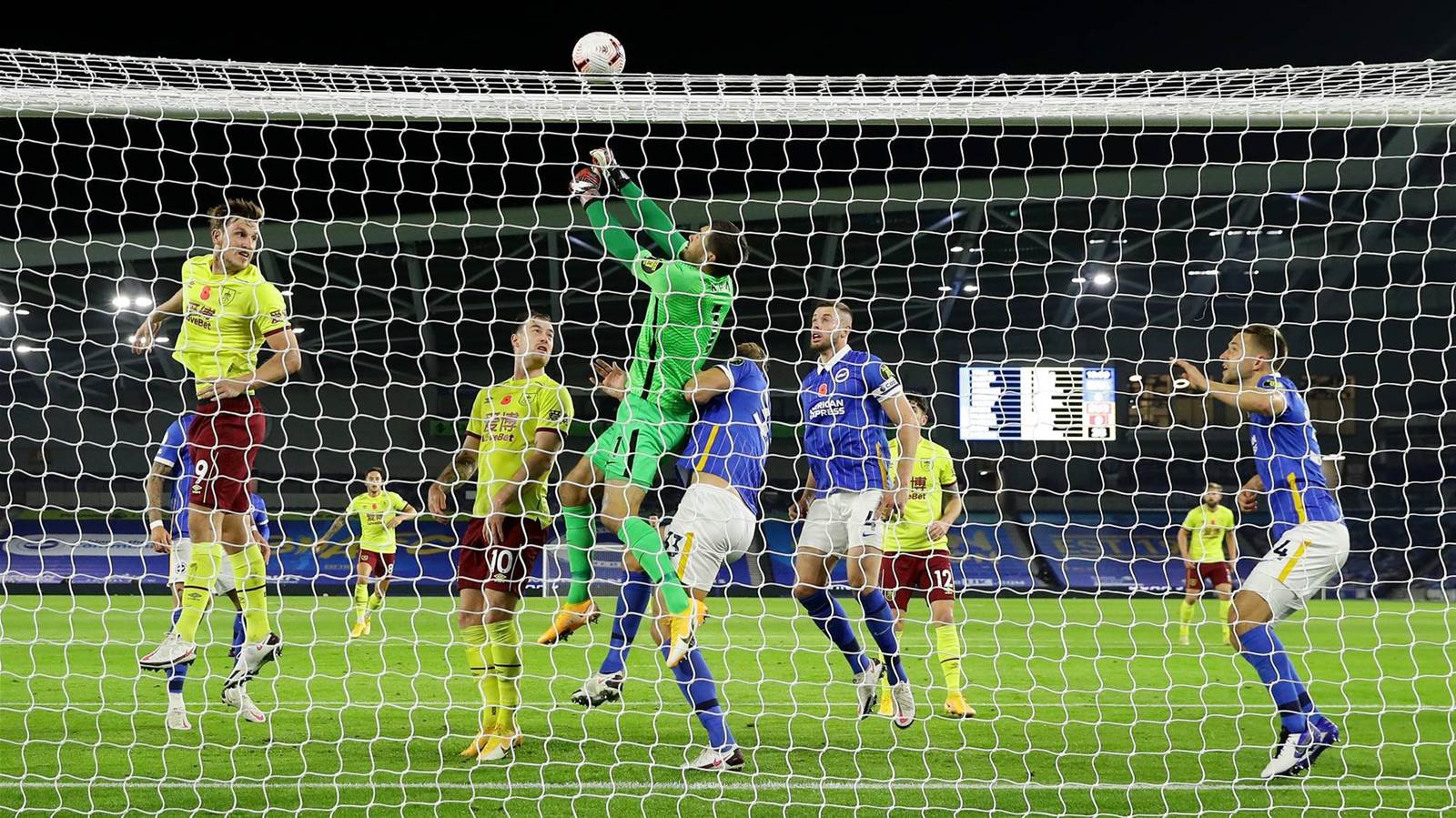 It was Ryan’s second clean sheet of the league season and his first since a shutout in the 3-0 win at Newcastle in September.

Brighton, however, have not won in six games and are just three points clear of the relegation places in 16th.

- Stoke City won 3-0 against top-of-the-table Reading, with Harry Souttar impressing once again in central defence. The Potters are now eight in the Championship and just a point off the play-offs.

- But there was no such joy for Riley McGree, the midfielder starting in Birmingham City’s 3-1 loss to Bournemouth before being brought off in the 54th minute.

- The FA Cup first round featured a host of Australians in action, including midfielder Elliott Ronto who scored the winning goal for Canvey Island in a 2-1 win over Banbury United.

- Elsewhere, Hull City left-back Callum Elder bagged an assist in his side’s 2-0 win over Fleetwood Town. Another all-League One tie saw Ryan Williams play a full game for Portsmouth in a 3-2 win over Ipswich after extra time.

- Usually Charlton Athletic’s back-up goalkeeper, Ashley Maynard-Brewer was given the nod between the sticks against Plymouth Argyle, but couldn’t keep a clean sheet as his side was beaten by a single goal.

- Cameron Burgess was booked as League One Accrington Stanley was dumped out of the competition by League Two Tranmere Rovers, losing 2-1 after an 84th minute winner. And Burton Albion suffered an even bigger shock, losing 1-0 to non-league Barnet with Ryan Edwards playing 64 minutes for the losing side.

- Oldham Athletic survived a scare to beat non-league Hampton and Richmond 3-2, with George Blackwood an unused sub and Harry Kewell in the dugout. Blackpool had an easier time against Eastbourne Borough; Kenneth Dougall played 85 minutes of a 3-0 victory.

- Meanwhile, Jack Iredale played 85 minutes as Cambridge United lost 2-0 to Shrewsbury Town, who had Matthew Millar come on in second-half stoppage time, and Reagan Ogle was an unused substitute for Fylde in a 2-1 defeat to Exeter City.

- The resurgence of Tom Rogic at Celtic continues, after the midfielder registered his fifth assist in his last three league games in a 4-1 win over Motherwell.

- A forgettable afternoon for Martin Boyle was compounded when the referee denied him a penalty after being downed by Aberdeen’s Matty Kennedy during a 2-0 loss for Hibernian. Hibs slip a place below Saturday’s opponents and into fourth place in the Scottish Premier League.

- In the third tier, Aaron Lennox was in goal for Montrose in a 3-2 win over Peterhead, while William Baynham came on in the 88th minute for League Two leaders Queen’s Park in a 1-0 win over Elgin City.

- Mathew Leckie was brought on in the final moments of Hertha Berlin’s 3-0 win at Augsburg in the German Bundesliga. It was his third outing of the campaign and his side move up to 12th after its second win of the season.

- Ajdin Hrustic, however, remained on the bench for Eintracht Frankfurt in their 2-2 draw with Stuttgart. That’s the fourth league game on the spin that the winger, who is still yet to make his debut, has been an unused sub.

- Maccabi Haifa remain top of the Israeli Premier League, after Nikita Rukavytsya continued his excellent scoring run. He converted a penalty in a 2-1 win over Ashdod to take his tally to 11 in nine appearances in all competitions this term.

- Utrecht lost 3-0 to pace-setters Ajax in the Dutch Eredivisie, but did not call upon Daniel Arzani, who remained on the bench as his side slipped to a second league defeat of the season.

- Declan Lambert played 90 minutes in Den Bosch’s 2-1 defeat at home to PSV II in the Dutch Eerste Divisie. Twin brother Ryan also started but was withdrawn after an hour.

- There were two sub appearances for Portuguese-based duo Samuel Silvera and Anthony Carter. Silvera was an 82nd minute arrival in Casa Pia’s 1-0 loss to Sporting Covilha, while Carter came on in the 72nd minute in Academico Viseu’s 1-1 draw at Segunda Liga bottom club Varzim.

- After being sent off in Europa League action midweek, James Holland was an unused substitute for Austrian side LASK in their 4-0 win over Admira.

- FC Midtjylland returned to the top of Denmark’s Superliga after a 4-0 win over Kobenhavn, with Awer Mabil playing the last 18 minutes as a substitute for the victors.

- Sonderjsyke are just two points behind with a game in hand after Lawrence Thomas kept a clean sheet in Sunday’s 3-0 win over Horsens.

- Defender Aziz Behich played a full game for Kayserispor in a 1-0 defeat to Hatayspor in the Turkish Super Lig.

- After joining the club in September, Apostolis Giannou remains without a win in six attempts for Greek side OFI. He played 61 minutes in his new club’s 2-0 loss to Olympiakos to slip to 10th in the Super League.

- Aaron Mooy was unable to prevent Shanghai SIPG from losing 2-1 against Beijing Guoan in the Chinese Super League – the club’s second defeat in a row.

- After scoring his first goal for the Abha Club last weekend, Craig Goodwin was on the losing end this time around, going down 3-0 to newly promoted Al Batin in the Saudi Arabian Pro League.

- So too was Dimitri Petratos for Al Wedha – for the third league game in a row. Petratos played 86 minutes before being substituted, only to see his side then conceded 94th-minute winner against Al Raed to lose 3-2.

- Elsewhere, it was a slightly better weekend for Mitchell Duke. Just. The forward was booked but at least helped his side earn a point in a 1-1 draw with Al Ittihad.

- And Brad Jones secured the bragging rights as his Al Nassr side beat Rhys Williams’ Al Qadsiah 2-0. It’s Al Nassr’s first win in the league at the first time of asking this season.

- Jason Geria was brought on in the second-half of JEF United’s 5-1 defeat to Montedio Yamagata in Japan’s second tier. His side was actually already 5-0 down when he was introduced.

- And Pierce Waring was an unused substitute for Cerezo Osaka under-23s in a 2-0 defeat to Azul Claro Numazu. His side remains bottom of the J3 League.

- 20-year-old Luka Prso came off the bench for Osijek II during the final minutes of a 5-1 win at Sesvete. Amazingly, the score was just 1-0 until the 80th minute when the floodgates opened.

- Luc Jeggo made his ninth appearance of the season, eight of which have been from the bench, when he came on in the 83rd minute of Bryne’s 3-0 win over Sotra in Norway’s second tier.

- Kaizer Chiefs lost 5-0 on aggregate to Orlando Pirates in South Africa’s 8 Cup after a 3-0 loss in the second leg at the weekend, with Kearyn Baccus playing 79 minutes for the losers.

- Zachary Anderson played a full game for Hougang United in a 4-0 defeat to Albirex Niigata Singapore.

- Daniel Wong was an unused substitute for Nei Mongol Zhongyou in a 1-1 draw against Heilongjiang Lava Spring in China’s League One.