Socceroos stalwart Trent Sainsbury opens up on the gut-wrenching non-start to his international career that saw his commitment bizarrely questioned.

The 2013 East Asian Cup was looming as the perfect launch pad for the former Central Coast star and the centre back was buzzing.

He never left the bench.

Later he was told it looked like he “didn’t want to be there". Nothing could have been further from the truth.

As Sainsbury points out to 20FOUR that was “total bollocks. That's just them not getting to know their players.”

Since then the 25-year-old has racked up 33 caps for his country and was an integral part of Australia's 2015 Asian Cup-winning squad.

Currently on loan to Inter from Jiangsu Suning, Sainsbury concludes it was the knockback that spurred him on.

“It just gave me that extra hunger and desire to want to you know, prove them wrong and you know, just give them the bird”.

Source - In My Own Words: Trent Sainsbury 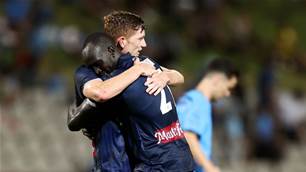 New Socceroos star: 'I can only give back to the country that's given me everything'