Another former international is reported to be headed to the A-League, this time to Western United.

The midfielder first started his professional career at Inter Milan.  While in the youth academy he caught the eye of José Mourinho who called the player up to the senior team in 2009.  Krhin then spent four seasons at Serie A side Bologna before returning to Inter in 2014.

He was loaned to Spanish La Liga Córdoba mid-way through the 2014-15 season.  Krhin then joined La Liga's Granada ahead of the 2015-16 season.  After two seasons with the club he was loaned to Nantes in 2017 after Granada had gotten relegated to the Segunda División.

The loan was made permanent for the next season and Krhin ended up staying with the Ligue 1 club until last year.  He joined Spanish Segunda division side Castellón midway through the 2020-21 campaign and parted ways with the side at the end of the season.

In total Krhin has 184 appearances in various European competitions including play in the Europa League.

He also played for his national side for a decade, getting 48 caps for Slovenia.   Krhin was part of the 2010 FIFA World Cup squad but did not see any game time.

Krhin is a central midfielder utilized in a deeper midfield position in recent years but has also at times been placed on the wing. Should United sign the 31-year old they would add needed creativity in the centre of the park.

He would not be the first Slovenian to compete in the A-league, with former national team captain and teammate Robert Koren having played for Melbourne City from 2014 to 2016.

The move to Western United could reconnect Krhin with former teammate Alessandro Diamanti.  The two men played together at Bologna. After scoring just one goal across their opening two games, Western United are considering adjusting skipper Alessandro Diamanti's role in a bid to recapture their best attacking form. 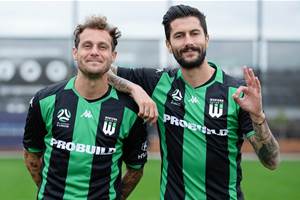 Western United added one of the final key pieces of their squad today with the official unveiling of new Italian attacking midfielder Alessandro Diamanti.