Socceroos pair Tom Rogic and Alex Gersbach both returned to club action in midweek as Celtic defeated Rosenborg 3-1 in the UEFA Champions League second qualifying round.

Rogic, who was part of Australia’s 2018 World Cup squad, was a 77th minute substitute for the Hoops at Celtic Park in their first leg encounter.

The midfielder had a break following his international commitments in Russia but is now back in contention ahead of Celtic’s Premiership opener against Livingston on Saturday week.

Gersbach also came off the bench for the first time this campaign, introduced as a 72nd minute substitute for the Norwegian champions.

The 21-year-old left-back was overlooked for World Cup selection is attempting to break back into the Rosenborg side after spending six months on loan with French club RC Lens.

The two clubs are due to meet in the second leg on Thursday morning (4:45am AEST) to decide who faces Greek champions AEK Athens in the third qualifying round with the winner progressing to the group stage.

Australian goalkeeper Evan Ridley was an unused sub for Suduva.

Awer Mabil was overlooked again as FC Midtjylland lost 2-1 away to Kazak champions Astana in their first leg on Wednesday morning.

48. Garuccio released down the left; his pint point cross finds MacLean who chests the ball into the bottom right corner. 1-0 Hearts!

On Wednesday morning, Ben Garuccio made his Hearts debut and got the assist for the opening goal in their 5-0 victory over Cowdenbeath. New signings Oliver Bozanic and Ryan Edwards were both absent.

Buzzing to make my competitive @JamTarts debut! Top shift by the lads tonight... Now on to the weekend! Thanks for the support 🤙🏼😁 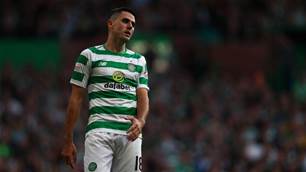