The chance to play for your country in football-mad South America at next year's Copa America will be unmissable, Socceroos coach Graham Arnold says.

Unlike many of the players he'll take to next year's Copa America, Arnold has first-hand experience of representing your country in football-mad Argentina.

Arnold was part of the Socceroos team which lost 1-0 to the Diego Maradona-led Albiceleste in a World Cup playoff in Buenos Aires in 1993.

It's a memory that he quickly recalled when the Socceroos were pitted alongside the co-hosts for the 2020 Copa America in Wednesday's draw in Colombia.

Australia will face Lionel Messi's Argentina along with Chile, Paraguay, Bolivia and old foes Uruguay in the 12-team South American continental championship as one of two guest nations.

It's an opportunity Arnold is urging those lucky enough to earn selection to make the most of.

"Sometimes you reflect back on the wonderful experiences the Socceroos had playing in 1993 at River Plate against Maradona and (Diego) Simeone and those types of players," Arnold said.

"That group of players experienced playing in South America.

"But this group of players, close to none of them have had the wonderful experience of playing in a very different football culture of South America.

"Fans and everyone should be really excited about this opportunity ahead of us."

Of Australia's current squad only a handful have played international football in South America.

Ryan and Milligan, along with Tom Rogic and Mitchell Duke, were also involved in a 6-0 friendly defeat at the hands of Brazil in Brasilia in 2013. 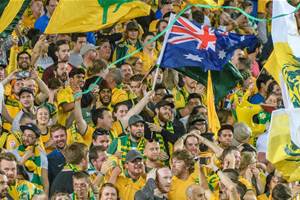 Arnold believes the opportunity to take on some of the world's best players, such as Messi, Uruguay's Luis Suarez and Chile's Alexis Sanchez will be invaluable for the younger players in his team.

"You're talking about the oldest competition in the world we're going to and we've been invited to," he said.

"It's a wonderful moment for Australian football overall.

"It's never happened before.

"I wouldn't say it's in line with the World Cup because it's obviously the most prestigious tournament in the world but when you're talking about Euro championships, Asian Cup, Copa America you'd probably say it's right up there."

Australia will kick off their Copa America campaign against 15-time champions Uruguay in Cordoba on June 13.