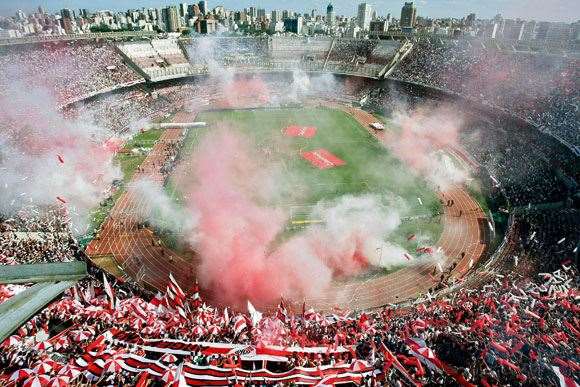 IT’S THREE HOURS till kick-off and already the suburb of Belgrano is in lockdown. Streets are blocked off with chain link gates and fences improvised from ragged slabs of wood. At every crossroad there’s a detachment of riot police kitted in black helmets, jackboots, body armour. Around them are swarms of dark-skinned men in security uniforms, their faces scrawled with tattoos that look alarmingly prison-drawn. There’s a River Plate street and, four blocks south, there’s a Boca street. This is about as close as the two armies will get.

On the River Plate front there’s a carnival air. A giant barbecue throws out a plume of smoke, the houses are draped in red and white flags, old stereos blast out River chants. A knot of red and white fans, bunched at the first of eight security checkpoints, breaks into song. It’s a strident, militant tune, but they sing at no great volume – they know they’re going to need their voices later on:

“Wherever you go we’ll always be there.

You’re my life, what I love most.

Those who love you, those who sing for you.

Four blocks away a knot of blue and gold Boca fans is bunched at the first of its eight security checks. There’s no carnival on this side, no barbecue, no singing. The houses have their curtains drawn, their doors locked. The Boca fans push in tight and look about with short, conspiratorial glances. No one’s talking. Perhaps it’s the platoon of riot police standing in three rows, at attention, their batons drawn. 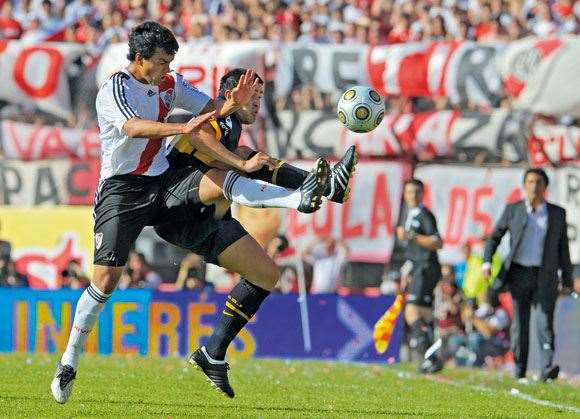 I know what the atmosphere is like on both fronts because I get off the bus a stop too early and wander down the Boca streets. I vaguely wonder why two ratty youngsters with cigarettes clamped between their teeth are staring at me with hard eyes. I join the back of the throng at the checkpoint and look about breezily. A security guard sidles up. He silently takes me by the elbow and leads me towards the platoon of riot police. He examines my ticket. “You’re sitting at the River end,” he whispers into my ear. “You must leave here.” He unlocks a chain link gate and pushes me through.

As I negotiate the umpteen security checkpoints back to the River streets, I muse on a story I had heard. In the mid ‘90s a London journo was standing agog on the terraces during a Superclasico game as the flares and smoke bombs exploded and an unearthly din shuddered through the towering concrete stands. The journo asked the man standing next to him – a Falklands War veteran – if this was akin to warfare. The old vet shook his head. “No,” he said, “this is about love.” Boca lost 2-0 that day. After the game two River Plate fans were shot dead. Before night fell, graffiti began appearing around the city: “River 2-2 Boca.”

A recent survey found that 40 per cent of Argentineans call themselves Boca fans, 32 per cent River fans. With close to 30 million supporters between them, these two clubs are the colossi that loom over Argentinean football. And it’s difficult to overstate the enmity they feel for one another. It’s a hatred born of proximity – the heartlands of both clubs are separated by the few acres of BA’s Microcentro. It’s a hatred maintained by the closeness of the contest – of the 325 games played, Boca has won 119, River 102, with 104 games finishing in a draw. But above all, it’s the hatred of a class war.

La Boca is a grimy dockside barrio sprawling south of the city centre. It was thrown up in the 1870s when boatloads of Genoese workers flooded Buenos Aires. They arrived destitute, built ramshackle slums of wood and corrugated zinc, and ground out their days on the docks and in the shipyards. These days, the slums around La Boca’s port have been tarted-up in gaudy colours and tourists flock to the area to buy cheap paintings of tango dancers and marvel at the raffish squalor of old Buenos Aires. But you don’t have to walk too far beyond the tourist precinct to see the graffiti, the splintering slums, the cracked roads, the rake-thin children, and know that the squalor is still very real.

River Plate territory, by contrast, is north of the city centre. These suburbs – Recoleta, Palermo, Belgrano – also sprung up in the 1870s when the gentry noticed its servants were dropping dead of consumption. Terrified, they abandoned their San Telmo mansions and fled north, where the air was fresh and the river clean. They laid out grand tree-lined avenues and sprawling parks replete with polo grounds and hippodromes. These days the parks fill with joggers and paseo perros – young men paid to walk the dogs of the Porteno yuppies.

Sip a ristretto in a Recoleta cafe and you could be in Paris; knock back a longneck of Quilmes in a Boca bar and you’re definitely in South America. It’s a class war the two armies gladly indulge. River fans call themselves Los Millonaros – the Millionaires; Boca call themselves Los Xeneizes – the Genoese. Boca’s stadium, La Bombonera, is a sheer 50,000-seat fortress that rises straight from the grey docklands. Its concrete walls are covered in hellish murals showing shadowed workers grinding away on the dark satanic docks. River’s stadium, La Monumental, is a vast two-tiered concrete bowl surrounded by golf courses and banks of clay tennis courts. Its walls are emblazoned with Adidas logos.

You’re friends with the police.

In Mar del Plata you chickened-out.

From the Borrachos (River’s firm) you got beat the shit out.

You shat your pants, you’re a coward!”