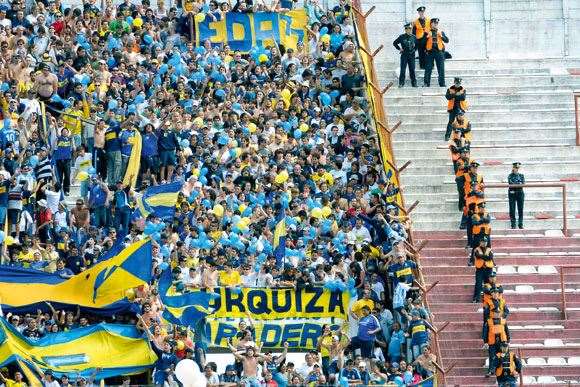 There doesn’t seem to be enough oxygen in the place.
Images: Getty Images

Hear 60,000 throats howling this song – as volleys of smoke bombs explode and fusillades of bungers are lobbed into the air and a blizzard of shredded newspaper settles on the field like snow and 60,000 white-and-red jerseys bob in unison and the concrete bowl of the Monumental throbs beneath your feet. The song has a marching beat and the River fans repeat it over and over in the hour leading up to the game, the pitch of the tune steepening with each repetition, the tone of the crowd sharpening, growing more and more feverish, the men with their shirts off sweating in the fury of their singing.

It’s half an hour before kick-off, the stadium is overflowing, and clouds of dubious-smelling smoke are wafting across the terraces. Argentina’s stadiums are now alcohol-free, so the fans turn to other substances. Shirtless men dance in demented circles, their bodies glistening with sweat, their eyes wide and glassy, and all the while that song is repeated, over and over, the battalion of drummers growing more ferocious, thumping the beat with blows I feel in the hollow of my chest.

And just when I think the noise can’t get any louder, the air any more taut, two over-muscled men, their heads shaven, their shirts off, jostle to the very middle of the terrace, directly behind the goal, and clear a bay 20m deep and 50m across. When they’re satisfied the area is sufficiently empty, the hard-core River fans, the ultras, the men who’ve been clustered out the back of the stadium for the past two hours working themselves into a frothing frenzy, pour onto the terrace twirling red-and-white umbrellas above their heads. It’s a dandyish image, but don’t be fooled. These ultras – Los Borrachos del Tablon (The Drunks of the Terrace) – are not to be messed with. These are the most feared hooligans in the Americas and

on the Monumental’s northern terrace they’re top of the food chain. They decide what songs are sung, what flags go where. They decide who get tickets, who sits where, who sells food, how much they charge. In the member-owned football clubs of Argentina, these ultras own the club. And they take a cut from every revenue stream – player wages, transfer money, member fees, ticket sales. Los Borrachos are professional fans; they make a plush living as the fiercest supporters of their club. And they guard this job with switchblades and handguns.

And now that they’re on the terrace and the drummers are in full stride and the smoke is so thick the sun has turned orange and another blizzard of shredded newspaper is tumbling down the terrace while at the southern end of the stadium, corralled behind a five-metre fence topped with razor-wire, the Boca fans are exploding their yellow and blue smoke bombs – I know why that London journo asked the old Falklands veteran if the Superclasico put him in mind of war.

This is River Plate’s band!

We’re gonna do the lap of honour.

I don’t care what they say.

The Bosteros and the police.

This band is insane.

To support a team means something different to Argentineans than it does Australians. It doesn’t mean wearing your team’s jersey. It doesn’t mean going to the game and raising your beer – or joint – in appreciation when your team scores. In Argentina, if you support a club, then you’re a frontline soldier. Boca’s ultras, for example, call themselves La Doce – The 12 – because they see themselves as the 12th man on the pitch. Front and centre on the razor-wire fence corralling the Boca fans is a 40m scroll of blue and gold cloth emblazoned with “Jugador #12” – “12th Player”. This is the mindset of the Argentinean football fan. They’re not here to watch. They’re here to sing and jump and hurl paper and light flares and lob smoke bombs and throw their right hands at the enemy army at the other end of the stadium. They’re here to make war.

But if it’s said that no one wins a war, then it’s certainly true today. Both sides hack and charge – the ref brandishes six yellow cards and two reds – but neither can outflank the other. Marcello Gallardo draws first blood for River, going over the wall and hitting the top corner from a 28th-minute free kick. For a moment I think the stadium is collapsing. There’s a surge of bodies, lifting me off my feet and carrying me a dozen steps down the terrace. The stadium shrinks under the noise and the raised arms and the showers of paper. But half an hour later, after relentless counterattack, Boca’s captain, Martin Palermo, stabs a ball past the River keeper. The sudden absence of noise is shocking. It’s as if 60,000 River fans have sucked in a breath all at once. There doesn’t seem to be enough oxygen in the place. There’s only the distant roar from the Boca terrace, muffled by the silence of the River army. It’s a quiet that puts me in mind of the Christmas ceasefire on the Western Front. It lasts for three seconds. Then the ultras raise their umbrellas and a smoke bomb goes off and the singing starts where it left off.

And when the final whistle blows 20 minutes later, the teams locked in stalemate, the singing continues. But it’s the Boca fans making the noise. They’re the army who invaded enemy territory, suffered the early blows, dug themselves in, then counterattacked for an honourable draw. So, as the players leave the field, it’s La Doce on their feet, their drums in the air, the round skins emblazoned with the number 12.

The 60,000-strong River army watches in silence. No one bothers heading for an exit. The stadium is in lockdown; riot police line every exit. No one in River colours will be allowed out until every single blue and gold jersey has been packed onto buses and shipped south. So they stand and watch while La Doce dances and hollers and shakes its drums. They watch with quiet resignation. But maybe there’s a smidgin of affection there, too. After all, you can’t have a war without an enemy.