The Maltese striker came on for Adam Le Fondre in the 58th minute with Sydney 1-0 down to Hoang Anh Gia Lai on Tuesday, and struck a minute later from Anthony Caceres' cross to level the tie.

It was Buhagiar's 21st goal for the club, but the first header.

With a tight schedule in draining conditions - all matches are being played in hot and humid Ho Chi Minh City - Muscat had made seven changes.

Sydney and Yokohama now meet in back-to-back matches on Friday and Monday.

Hoang Ahn Gia Lai had lost their first group match 2-1 to Yokohama and were immediately on the back foot as Sydney pressed early with two penalty shouts rejected.

Having survived that early pressure Gai Lai went ahead after 26 minutes with a 30-yard shot from Vu Van Thanh that was deflected off Ben Warland.

Sydney were better in the second period and deserved their equaliser.

"We had a few chances in the first half at the start but they didn't go our way," said Buhagiar.

"The coach got into the boys at half-time and told us we need to do better. I thought we came out strong and were unlucky not to get a second."

Our goalscorerâ€™s thoughts on our draw with Hoang Anh Gia Lai and whatâ€™s coming up next for the boys in Vietnam #SYDvHOA #ACL2022 #SydneyIsSkyBlue pic.twitter.com/VJUyJRmSUs

The entire group is being played between 16 April and 1 May with teams in COVID-19 bubbles. While Hoang Anh Gia Lia are not based in Ho Chi Minh City they have attracted a lot of support . 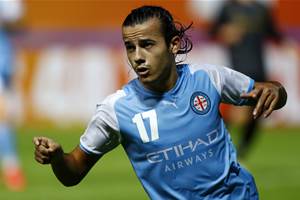