Adelaide United certainly came out to play with Ryan Strain rocketing the post with his weak foot on the fifth minute, before George Blackwood had a goal disallowed for a push in the back.

Sydney took the lead through Paolo Retre in the 21st minute as he rifled home Paul Izzo's rebound from a corner and was at the double when he side-footed politely into the bottom corner minutes later.

Riley McGree returned for Adelaide and was on the scoresheet bringing the score to 2-1 just before half-time with a clever flick from a free-kick.

The ball was in his net but luckily it was disallowed. His save against Michael Maria's volley was his

Besides a few poor touches that stymied Sydney FC's attacks, King did a good defensive job, especially as the watching eye of the returning Michael Zullo was on the bench.

Sydney had a tense spell on the back foot at the beginning of each half but rose out the storm.

Another confident performance from the Socceroos centre-back

A confident starting debut for the youngster. You expect a hiccup here and there but overall he linked up extremely well with his midfield players. 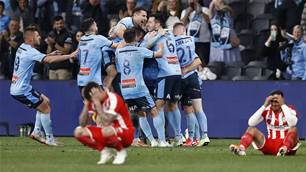 Three things we learned from the A-League Grand Final 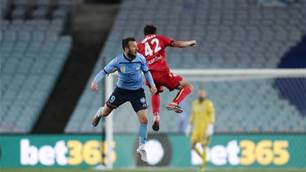