Perhaps he was still jet-lagged from flying to England and back for an international friendly but it was a low-key first half from the Sky Blues celebrated marquee in the inaugural A-League Grand Final. Yorke stepped it up after the break, pulling the strings for Sydney’s attack and, in a moment of magic, setting up the only goal of the match on 62 minutes. Engaging the attentions of two Central Coast Mariners’ defenders, Noel Spencer and Andrew Clarke, the Sydney skipper laid it on a plate for team-mate Steve Corica who drove a low angled shot past the outstretched arm of keeper Danny Vukovic sealing the historic win in front of nearly 42,000 at Aussie Stadium (Allianz). 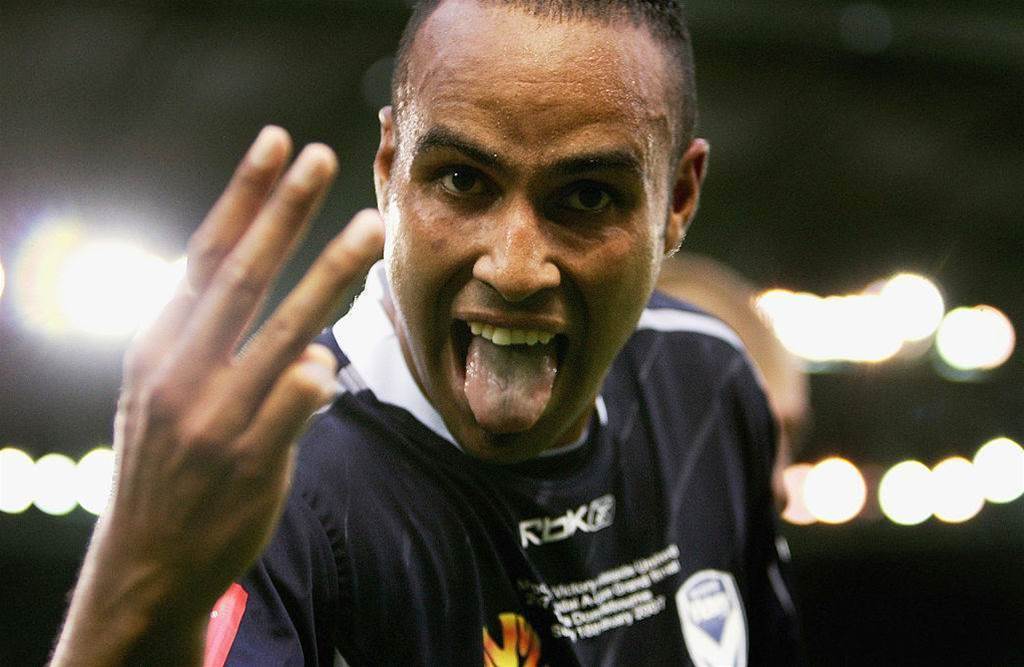 Victory’s smiling assassin was on a double hat-trick when he ripped the heart out of arch rivals Adelaide United in front of 55,436 people at the Telstra Dome (Etihad). In a brilliant individual performance that still has fans reaching for the rewind, an unstoppable Thompson scored five in a 6-0 demolition job – the most goals ever by player in an A-League match. By the time Reds skipper Ross Aloisi was given his marching orders for a second yellow on 34 minutes the Socceroo has already notched up a brace. He smacked home another leading into the break and two more were added on 56 and 72 minutes before Kristian Sarkies completed the rout deep into injury time.

The defender broke his leg in the first ever meeting between the F3 derby rivals in 2005 but was at his rock solid best against the Premiers when the two sides faced off on neutral territory. As 36,354 fans watched from the stands of Sydney Football Stadium (Allianz), the always reliable Durante pulled off several game-saving blocks while team-mate Mark Bridge scored the only goal of the match on 64 minutes, capitalising on a slip by former Socceroo Tony Vidmar. When a last-gasp penalty shout against the Jets was ignored, goalkeeper Danny Vukovic batted the arm of referee Mark Shield, earning himself a red, a lengthy ban and forfeiting his spot at the 2008 Olympics.

The attacking midfielder scored the only goal of the match in a clash largely remembered for the red card to Adelaide striker Cristiano on 10 minutes. Unlike their previous Grand Final clash this was no 6-0 rout. The outnumbered Reds dug deep, valiantly holding off the Premiers until the hour mark. Urged by Coach Ernie Merrick to ‘stay wide and bide your time,’ Pondeljak latched onto a back heel from team-mate Evan Berger and fired from 23-metres out to break the deadlock. Another contentious red a few minutes saw Victory striker Danny Allsopp head for the sheds but the home side held on for their second Championship in front of 53,273 fans at the Telstra Dome (Etihad). 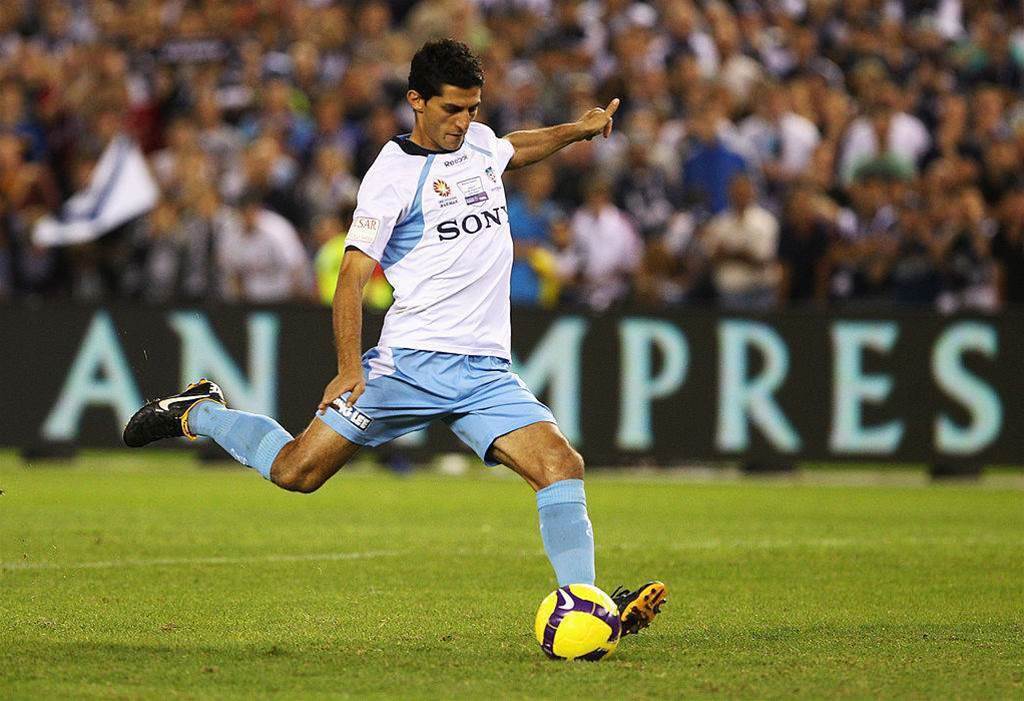 Charged with containing Victory hitman Archie Thompson, the Sky Blues centre back had his work cut out until a collision between the two players early in the first half ended the striker’s night. In front of more than 44,500 screaming fans at Etihad Stadium Colosimo held his nerve, making a number of crucial interventions to keep the Premiers in the contest. Mark Bridge drew first blood for the visitors on 63 minutes and Adrian Leijer clawed back the deficit on 81. After a goalless extra time, Colosimo coolly slotted home the first penalty. Team-mate Shannon Cole wasn’t so lucky but when Victory skipper Kevin Muscat and Thompson’s substitute, Marvin Angulo, fluffed their lines Sydney snared their second Championship.

On the wrong side of one of the greatest comebacks in Australian sport, the teenage goalkeeper’s heroics kept Brisbane Roar at bay for the full 90 and most of extra time to push the Mariners within three minutes of Championship glory. Standing tall throughout a torrential downpour and before a crowd of 50,000-plus at Suncorp Stadium, Ryan did the business one end while Adam Kwasnik (96’) and Oliver Bozanic (103’) gave the visitors a seemingly unassailable 2-0 lead. That is until Henrique popped up on 117 minutes followed by Erik Paartalu, whose header in the dying seconds sent the game to penalties. In a cruel twist for the young keeper his team fell 4-2 from the spot.

Continuing the theme from the previous year, man of the match honours went to a player on the losing side when the Glory’s skipper and midfield enforcer was rewarded for his efforts in smothering the Brisbane Roar attack. The visitors, ably marshalled by Burns, kept marksman Besart Berisha quiet until the 82nd minute when his header cancelled out an own goal by Ivan Franjic (51’). With the game headed for extra time, Glory’s Dean Heffernan received a second yellow. Burns continued to inspire his men to tough it out, but a controversial penalty, earned and scored by Berisha at the death, won the home side back-to-back-championships in front of 50,334 at Suncorp Stadium. 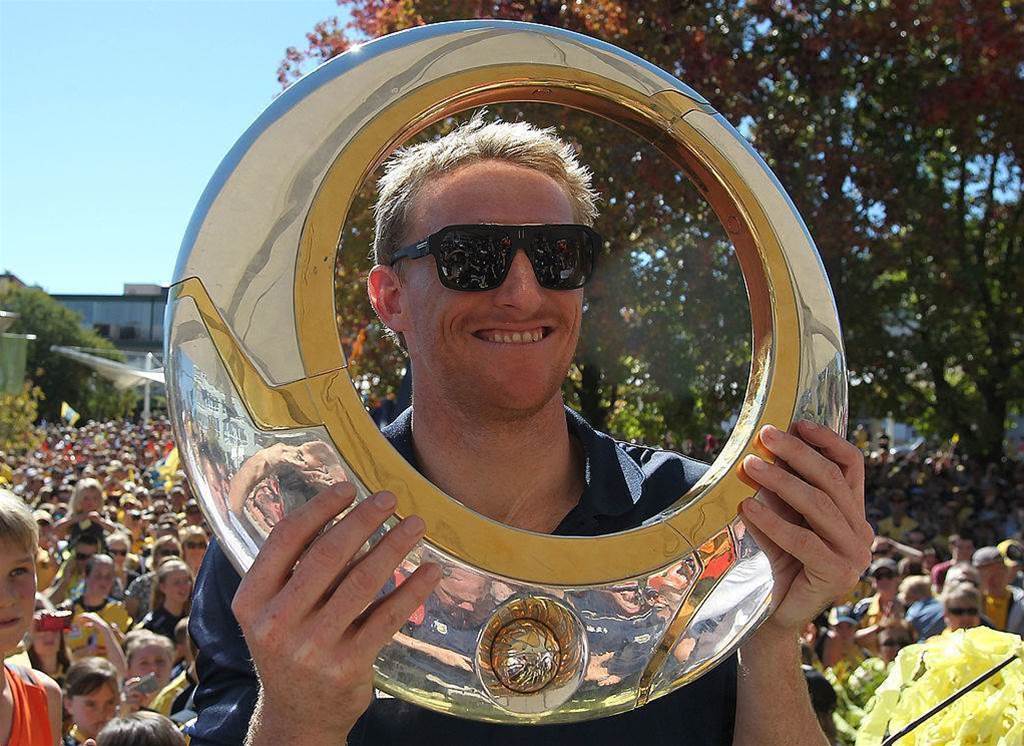 Finally! Perennial bridesmaids Central Coast Mariners landed the big one with Man of the Match McBreen contributing to the 2-0 win over Western Sydney Wanderers in front of 42,000 at Allianz Stadium. After falling short on three previous occasions, the Mariners struck first through veteran defender Patrick Zwaanswijk (44’) before the evergreen McBreen bolted the silverware to the club’s trophy cabinet with a penalty on 68 minutes. It was an extraordinary season for the 36-year-old 2012/13 Golden Boot winner who banged away 17 goals in the regular season plus the winning goal against Melbourne Victory that put his team into the decider.

Wanderers again came up short on the big occasion but opponents Broich and La Rocca couldn’t be separated for Man of the Match honours. Midfield maestro Broich combined with firebrand Besart Berisha to send the match into extra time after

Matthew Spiranovic’s opener and Henrique slotted home the winner to see off Western Sydney 2-1 at Suncorp Stadium. La Rocca played out of his skin in front f the 51,000-plus crowd and even shone in a mid-game tactical switch which saw him shifted to an unfamiliar centre back role but the medal was little consolation. “I don’t care’, he said, “we lost the game”.

First and second squared off in this decider at AAMI Park but it was all Victory has they stormed past their fierce rival 3-0 Adding salt to the wound was the performance of former Sydney FC star Mark Milligan who stepped up to win the Marston Medal for the Big V. Then 29, the Victory captain was brave, combative and industrious in front of almost 30,000 people. Nine years earlier a suspended Milligan missed the decider with the Sky Blues this time he made the moment count: “I asked the boys to dig deep tonight…to give everything they had and have no regrets.” 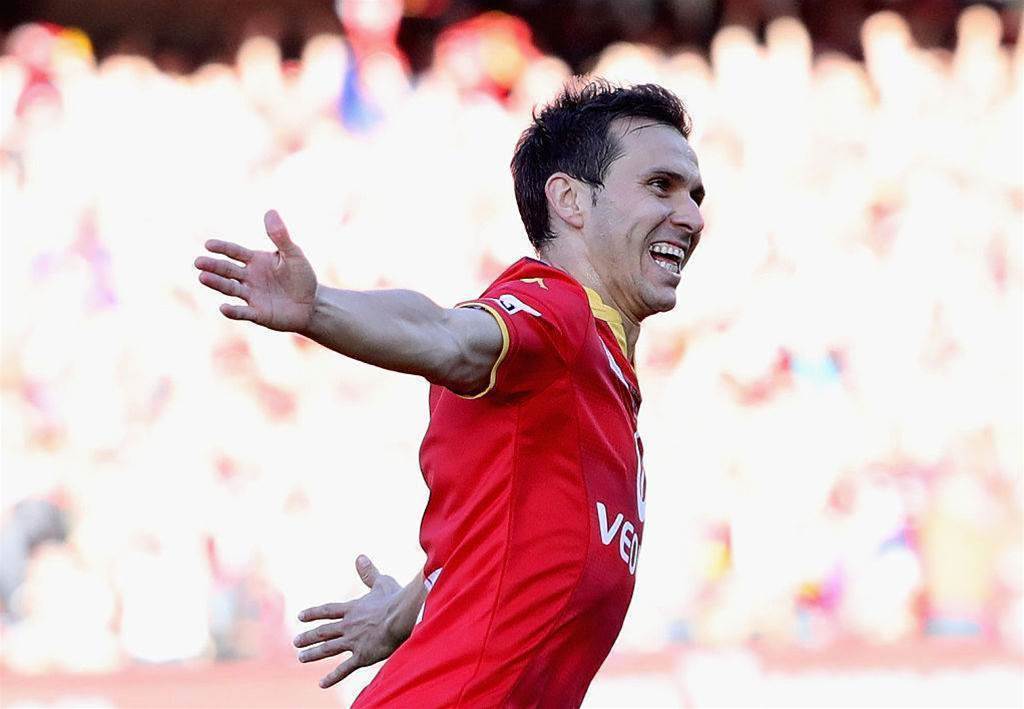 A free kick “David Beckham would be proud of” helped Isaias win Man of the Match in Adelaide’s first (and so far only) Championship triumph. The Reds diminutive midfield general ran the show in the 3-1 win over Western Sydney at Adelaide Oval and capped it off with a stunning curling effort in the 34th minute to put the home side 2-0 up and send most of the 50, 119 plus crowd into raptures. The performance had teammate Bruce Djite reaching for superlatives and a Becks comparison.

Once again the decider between Sydney FC and Melbourne Victory was decided on penalties and the Sky Blues prevailed 4-2 at Allianz Stadium in front of more than 41,500. Besart Berisha opened the scoring (20’) and Rhyan Grant fired home the equaliser (69’) before they lined up for the shootout. Georgievski, who had already signed with Newcastle Jets, was on the losing side but didn't walk away empty handed after picking up the Joe Marston Medal for an immense performance at left-back. He had 114 touches – the second most of all players – and six tackles and a game-high 15 clearances to become the fourth Victory player to win the award.

Victory were fortunate to win this one on the back of an offside goal but there was nothing lucky about Thomas’ performance. In front of almost 30,000 fans at McDonald Jones Stadium, the 25-year-old goalkeeper pulled off a number of stellar saves in the first half to keep the Jets attack at bay including a quickfire double from Riley McGree and Jason Hoffman. Not even a karate kick to the head in the 93rd minute could dampen his post-match celebrations – the sickening moment earning Roy O’Donovan a 10-match ban. With Thomas shutting out the Jets at one end, Kevin Muscat’s men pulled off the win thanks to a VAR glitch and Kosta Barbarouses’ controversial strike in the 9th minute, the fastest ever goal scored in an A-League Grand Final. 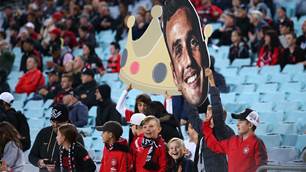