Another day, another win.

The Sky Blues found their rhythm early and scored within the opening five minutes but never had the need to go over second gear after taking the lead.

The Mariners started energetically as they sought to press the home team in a similar fashion to Brisbane the week before, but Stajcic quickly realised that his team weren’t equipped for such a strategy.

There was still enough time for Luke Brattan to take advantage, as he pinpointed Rhyan Grant’s run with a long ball that opened up the Central Coast defence, with Kosta Barbarouses scoring from right in front.

It seems like oppositions are trying to take the game to Sydney by pressing the primary playmakers, Milos Ninkovic and Alexander Baumjohann, but even when those two are being pressured, the deeper players such as Ryan McGowan and Brattan are more than happy to take the initiative themselves.

Following the goal, Mariners dropped deeper and refused to give as much space in behind them as before, but Sydney were happy to control the tempo of the game and conceded few chances on the counter.

Steve Corica’s consistent starting line up has allowed the team to become familiar with each other's patterns. When looking forward, the defenders already know whether their forward is going to come short to receive or attempt to beat the offside trap.

It means they are quick to adapt to the game situation and they showed that once again by comfortably taking care of business again tonight. 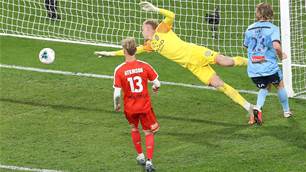