On a surface level, happy days were here again for Erick Mombaerts and his City side following their 3-1 win over Central Coast Mariners on Friday evening

The win was the Bundoora-based side’s fourth on the bounce and ensured that they would, for another week at least, retain their position atop the A-League table.

Add to proceedings Curtis Good’s first A-League goal since 2012 and a successful three points earned to mark City’s 10-year anniversary celebrations – Melbourne Heart’s first game in existence a 1-0 loss against the Mariners on August 5, 2010 – and the mood at AAMI Park was understandably positive.

Dig below the surface, however,  into the nuts and bolts of City’s triumph over the Mariners, and a number of areas that require attention from Mombaerts were readily apparent.

Time and time again before the Mariners resistance eventually buckled, City’s attempts to extricate the ball from defence into attack broke down into uninspiring forays forward; lacking much in the way of daring, verve and panache against a Mariners back-four of Jack Clisby, Kye Rowles, Dylan Fox and Ziggy Gordon.

Some of that bluntness can, of course, be attributed to the personnel available to Mombaerts and his staff – the absence of Jamie Maclaren and his lethal presence in and around the penalty area clearly continuing to be felt for City.

Regardless of the absence of their number nine, however, it still cannot be escaped that the attack that led to City’s lone goal of the half arrived when Harrison Delbridge – collecting the ball in space in his own backline – took it upon himself to break through the Mariners lines and switch City from defence to attack with one determined run.

Laying the ball off but continuing onward with his forward momentum, the 27-year-old defender was then almost able to get his head on a resulting ball into the area.

Taking advantage of now being able to control the ball deep in the Mariners half, Scott Jamieson hammered a long-range shot in that took a deflection and hammered off the bar and won his side a corner.

It was a bright spark in a first 45 that was otherwise devoid of attacking play that City – under the new, “City Football Style” of Mombaerts – would want to hang their hats on; Craig Noone’s 37th shot off the crossbar resulting after the Mariners defence, inexplicably, sat off the Englishman on the edge of the area and Adrian Luna’s late chance that was denied by Giancarlo Gallifuco coming on one breakdown in transitional defence on the right.

Indeed, throughout the opening 45 minutes, the best play in the attacking phase came from Milan Duric, Samuel Silvera and the visiting Mariners. In contrast to their red and white-clad hosts, the Mariners had a clear direction as they looked to move the ball into City’s defensive third and were only let down by that final, killer pass required to unlock the defence.

On a number of occasions, the visitors appeared all but set to unlock the hosts if not for the crucial late intervention of Delbridge and/or Good.

Though appearing much more comfortable in the second half as the press of the Mariners began to fade away, a City chance before the dagger of their second goal was indicative of their night and their reliance on individuals.

As City hoofed the ball forward in the 52nd minute of play attempting to escape a fierce press from the Mariners, the ball fell invitingly into the path of Luna to run onto. Taking a heavy touch, the Uruguayan could only give chase as Mark Birighitti sprinted off his line and scrambled the ball away.

Continued chances would result for City in the aftermath, but none would be capitalised on.

Though the result was different, the attack itself bore all the hallmarks of Maclaren’s winner against Western United two weeks prior – an occasion on which it was the personal, rather than the attacking intent, that made the result tick.

City’s second in the 59th minute, a goal that truly served to break the resistance of their foes resistance, arose both as a result of a breakdown in concentration from the visitors and some great work from one of their centre backs.

As City looked, once again, to recycle possession and move the ball across their back four from right to left, Good was able to take advantage of Oar switching off as he watched the ball slide to Jamieson and got into space to receive a return ball from his left-back in space.

With Oar scrambling, Good was able to lace a perfectly weighted ball into the path of Metcalfe on the left flank; setting the youngster up to play in the cross that Adrian Luna steered in to double the lead.

Ultimately, the above points can be seen as nitpicking.

Rostyn Griffiths would add a late third as the game wound down to put the cherry on City’s sundae and not even Jordan Murray’s late consolation can take away from the fact that City is top of the table.

However, City’s struggles in producing incisive attacking football when the game was on the line, when their opponent was pressing in a not unconvincing manner for goals of their own, bears watching going forward. 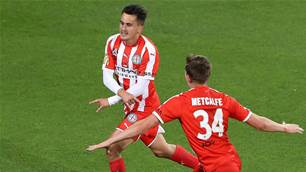 City finding a way without Maclaren 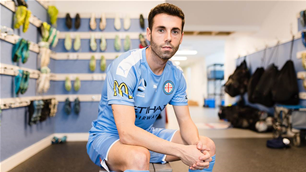 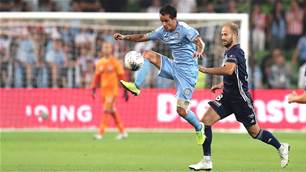