A United Arab Emirates footballer collapsed and died during a routine training session after suffering a massive heart attack yesterday.

Salem Saad, 31, of Al Nasr Club was immediately rushed to the nearest hospital but died soon after arrival.

"Salem was immediately transferred to the Rashid hospital following the training ground incident however despite desperate attempts from the doctors, he sadly passed away in the intensive care centre.

"The Al Nasr Club including chairman, board members, administrators and fellow players would like to express its sincere condolences to the family at this tragic moment." 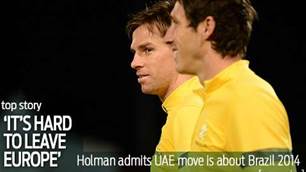 Holman: It was difficult leaving Europe