Brisbane Roar have received a warning ahead of Wednesday night's AFC Champions League (ACL) play-off versus Shanghai Shenhua that Carlos Tevez looks to be at his "sharpest".

Tevez and his new Shenhua team-mates will host Brisbane in Shanghai on Wednesday with a spot in the ACL group stage on the line, and one of the Argentine forward's most recent opponents believes Roar are in for a big test.

Nick Stavroulakis, who owns the shirt Tevez scored his first Shenhua goal in, was very impressed by the 33-year-old's work rate during a friendly last week.

The Aussie part-timers who took on the Chinese millionaires. @SydUtd58FC home after facing Carlos Tevez & Shanghai Shenua. On @FOXSportsNews pic.twitter.com/8YgtwJmqBa

While Martins notched a brace either side of Tevez's maiden Shenhua strike, it was the attacking duo's commitment to all facets of the game that stood out for Stavroulakis.

"There were certain moments where both of them were tracking back or trying to make a tackle," the Australian told Goal.

"There were moments where they were trying to combine with their team-mates at all costs, so if they're not at their sharpest, they've very close to it."

Stavroulakis added of Tevez's goal: "He took about 60 minutes to get a shot on target and in that 60th minute he had no space to work with, one touch, no back lift, with two players on him and he's found the top corner."

Sydney United's skipper swapped shirts with Tevez after the game at Hongkou Stadium - a career highlight for the midfielder, who spent time as a professional at Empoli and Peterborough United earlier in his career.

Stavroulakis is convinced last week's experience of flying to China, training full-time for a week and playing against such high-profile players will give his semi-pro club a huge boost heading into their new season, which starts next month.

Speaking about the club's trip to China, Stavroulakis said: "It's probably put the club back on the map."

Looking ahead to Wednesday's ACL play-off between Shenhua and Roar, Stavroulakis believes the visitors will need to curb their customary possession-based football slightly to counter the threat from Tevez and Martins. 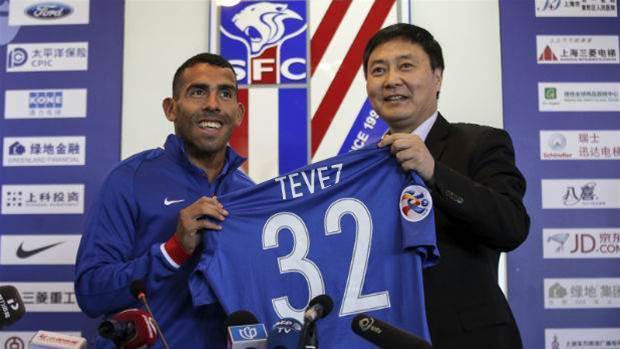 "I feel that they're going to have to be more defensive minded, and being able to play on a block first and foremost, not to allow space in behind for Tevez and Martins to be able to run around in the front third," he said.

"But in saying that, I still feel there are certain players at Roar, who can unlock the defence of Shanghai as well."