David Williams' show stopping performance off the bench saw Wellington cement their spot in the top six with a 4-1 win over Brisbane Roar at Westpac Stadium.

Wellington started the match on top and looked like winners from the offset. Avraam Papadopoulos accidentally headed into his own net and looped his own keeper Jamie Young as Wellington took the lead.

Despite the majority of possession and chances Mark Rudan was scratching his head as to how the two sides went into half-time level as Henrique levelled before the break. Jack Hingert pulled back for the Brazilian for a superb finish into the top corner.

Brisbane started the better side and Roar fans were optimistic, but those feelings were soon quashed when Adam Taggart butchered a clear cut chance to give Brisbane the lead.

The introduction of the pacy and powerful David Williams proved the difference for Wellington as a stinging shot into Jamie Young sent out the warning shots before moments later he curled a brilliant strike into the net to send Wellington 2-1 up.

The Roar keeper gave away a penalty with 10 minutes to go and was sent the wrong way by the Fijian Roy Krishna.

Sarpreet Singh finished off the scoring with a goal from a freekick. Despite the tight angle, poor work from the defensive wall helped the ball sneak into the near post for number four.

Wellington Phoenix notched up with their third win in a row while John Aloisi's job security must soon become precarious after four consecutive losses.

Kurto was hardly challenged throughout the match but Henrique's finish was scorching and gave the keeper no chance of stopping it.

Cacace's passing seemed to step up to another level as he attempted splitting passes through Brisbane's midfield and defence.

Had a hiccup and lost the ball outside the box but recovered well to stop the cross coming in from Mikkelsen encapsulating the effort by Wellington.

Durante had a comfortable match in the middle of Wellington's back three. The veteran dictated the play from defence and was commendable in possession.

Great work seeing the danger early and making tackles high up the field whilst he was onside to force what was eventually a Brisbane own goal into the net to make it 1-0 to Wellington.

Fenton was lively in the opening moments of the match but the left side of the field bore the fruit for Wellington throughout the match.

Mandi and Rufer are developing a decent partnership in midfield as the Spaniard broke up the play in midfield with perfection.

Rufer had one of his best games for Wellington against Brisbane with a superb work rate and incredible intensity to press, close down and win possession.

Once again Singh was pulling the strings for Wellington and can only flourish with the help of his midfield partners. Sarpreet Singh scored from the tight angle on the free-kick to put the cherry on top.

Still without a goal this season. Burns had another poor match despite a dominant Wellington performance.

Great turn to open up the field and terrific use of diagonal runs to stretch Brisbane's back line, Krishna was at his dangerous best. Krishna put the icing on the cake scoring a penalty and Wellington's third.

Brought on for Nathan Burns after an hour played. Williams lashed a left footed strike at Young but the shot was saved. A superb side-footed finish sent Wellington into the lead and was his first goal for Phoenix.

Not enough time to receive a rating 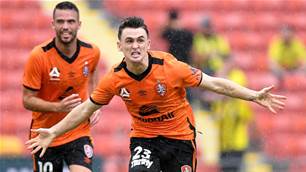