No doubt Moss was getting frustrated by Wellington's encroaching tactics on corners and set pieces although he handled himself well he could do nothing about Georgievski's own goal.A good save from the penalty but couldn't react quick enough for the rebound.

A delightful ball set free Jair who couldn't capitalise early in the match. Hoffman supplied another great cut-back to Ridenton who's poor finish was blocked.

Cleaned up well as Wellington attempted to play direct but his passing deteriorated as the game wore on and was dispossessed a number of times.

Provided great cover with the direct balls in behind his defensive partner but got caught in the sunlight as Roy Krishna dashed past and hit the side netting.

Was doing everything right until he comitted to heading Taylor's cut back which ended up in his own net.

Poor distribution put Newcastle under more pressure once they conceded which was deadly against players like Krishna and Williams.

Lost possession but hustled to win it back and nearly finished the move but his poor finish prevented newcastle going a goal up.

Passing play was neither here nor there as Dimi Petratos dropped deep to find some touches on the ball. 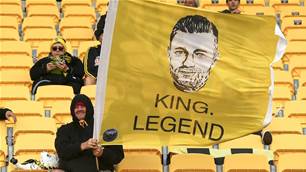