Sunderland have sealed a place in the League One playoff final, condemning Sheffield Wednesday to another season in English football's third tier.

Patrick Roberts scored the crucial goal in the third of 10 minutes of added time, gaining the Black Cats a 1-1 draw on the night at Hillsborough, and a 2-1 win on aggregate.

Socceroos defender Bailey Wright played a full game for Sunderland and is possibly just 90 minutes away from a return to the Championship, where he has previously turned out for Preston North End and Bristol City.

Wednesday, who included another Socceroo in Massimo Luongo in their starting line-up, had drawn level in the tie through Lee Gregory after 74 minutes.

"I'm just over the moon for the players because they deserve it," Sunderland manager Alex Neil, who only arrived at the club in February, said.

"I thought we switched off once in the game and we got punished for it.

"Other than that ... I thought we were the better team."

After numerous chances for both sides, Wednesday finally opened the scoring in the 74th minute to draw level on aggregate. Captain Barry Bannan's wonderful through ball released Marvin Johnson on the left and he sent over a low cross which was turned in by Gregory from close range.

But just when it looked like the match was heading for extra time, Neil's men silenced the home crowd with a 93rd-minute leveller.

A ball over the top picked out Jack Clarke on the left and he got to the byline before delivering a low cross which found Roberts, who lashed past Bailey Peackock-Farrell in the Owls' goal.

Wednesday manager Darren Moore told Sky Sports the game was "a bridge too far" for his side, who had finished one point and one place above their opponents.

"I'm really disappointed for them because they put a lot into the game and having got back into the game, it looked like we were on to go on and force a winner," Moore said.

"When I look back at the two games, it's two lapses of concentration which cost us and that's football."

Sunderland will now face Wycombe Wanderers on May 21. Sunderland, who were in the Premier League as recently as 2017, have lost their three previous Wembley playoff finals, in 1990, 1998 and 2019. 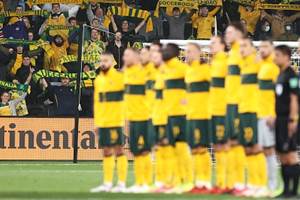 The Socceroos have teed up a friendly with Jordan in Doha as preparation for their cut-throat World Cup qualifying play-off against the United Arab Emirates.