As LAFC’s chief technology officer Christian Lau tells FTBL: "Ultimately, it has everything to do with eliminating friction everywhere we can [at the stadium].

"All technology we deploy is all informed by the customer.”

This “friction” as Lau notes refers to what many fans in the A-League (and globally for that matter) have become resigned to experiencing for too long.

Queues for everything from ticketing at turnstiles to food and beverage to merchandise stands, bathrooms, and tech problems such as slow WiFI (or none at all).

This can all be par for the A-League course.

LAFC's stadium the Banc of California Stadium - or just “The Banc” - is a work of art, turning those ideas on their head.

The uber-cool, high-end home deck situated just south of downtown LA is a 22,000 all-seater with a safe standing area for the club's active fans.

“Fans say the stadium has a resort feel,” notes Lau. He’s right. And it's pimped up with the latest in tech.

The MLS outfit is finessing a ‘touch-free customer journey' with the help of its tech partners whilst also enabling a crowd intelligence platform for its operations team at the Banc.

All fortuitous timing given the pandemic shows no signs of slowing as it causes havoc with MLS games in their version of the A-League hub in Florida.

After all, who wants to line up with hundreds of other fans in close proximity even when the pandemic is over?

The MLS franchise uses digital tickets on mobile devices and is soon to roll out facial recognition with ticketing and payments as well as designated special access turnstiles for wheelchair users when fans return to the arena.

“We’ll have elevated temperatures sensors as well as a mass detection camera [similar to airports] so the turnstile will open, the temperature of the fan is taken instantly. 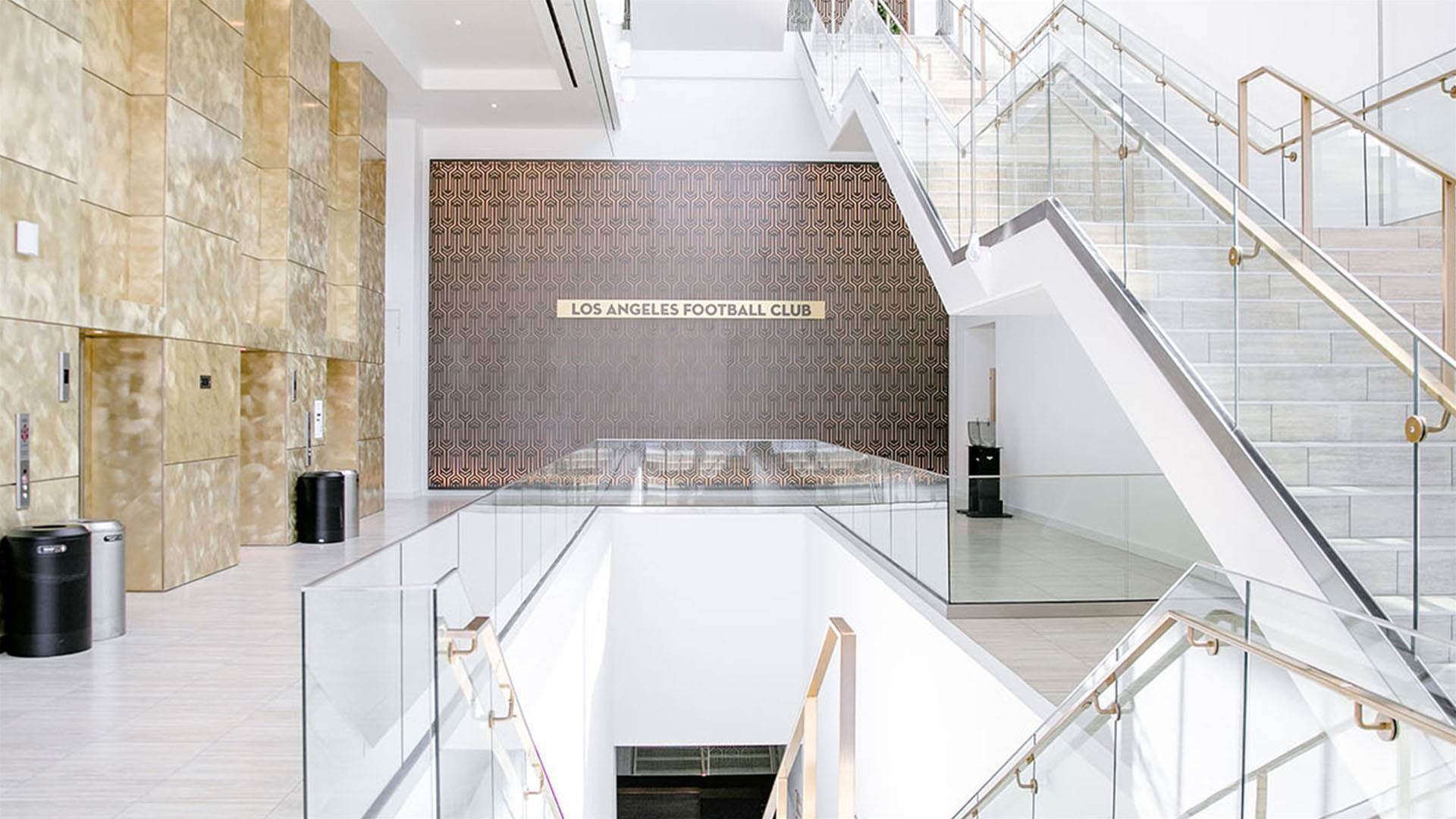 "We’ll need this for up to the next 24 months. It shows to the customer that we’re taking their health seriously,” Lau adds.

The Banc is also a cashless venue.

“The priority will be mobile ordering because customers don’t want to stand on line to order,” Lau, a former US Navy Intelligence specialist who manages the implementation of technology across the MLS outfit's enterprise, adds.

IoT (Internet of Things) is another focus for LA's newest MLS operation, enabling LAFC to, for example, assist with toilet dispensers and hand sanitizer levels (AI technology alerting operations staff when the levels are getting too low).

“The stalls in the bathroom, not unlike a parking garage where you have green or red signals, have the technology so you’re not guessing and touching the doors to figure which ones are open.

“We’re working through all this to make the guest experience as easy as possible.

"Operationally we’re trying to keep fans healthy and for them to feel safe,” Lau adds.

For instance, the fan after-parties up on the sunset decks have become one of the hottest tickets in LA (“it just grew organically and the word’s kinda got out,” notes Lau.)

And LAFC, rather like A-League clubs Victory and Wanderers, soon found a raucous fanbase whose color and noise are attracting fans who may not be rusted-on MLS aficionados in LA.

At the heart of LAFC's (Los Angeles Football Club) ethos are the fans and their ‘experience’ at home matches in the MLS. 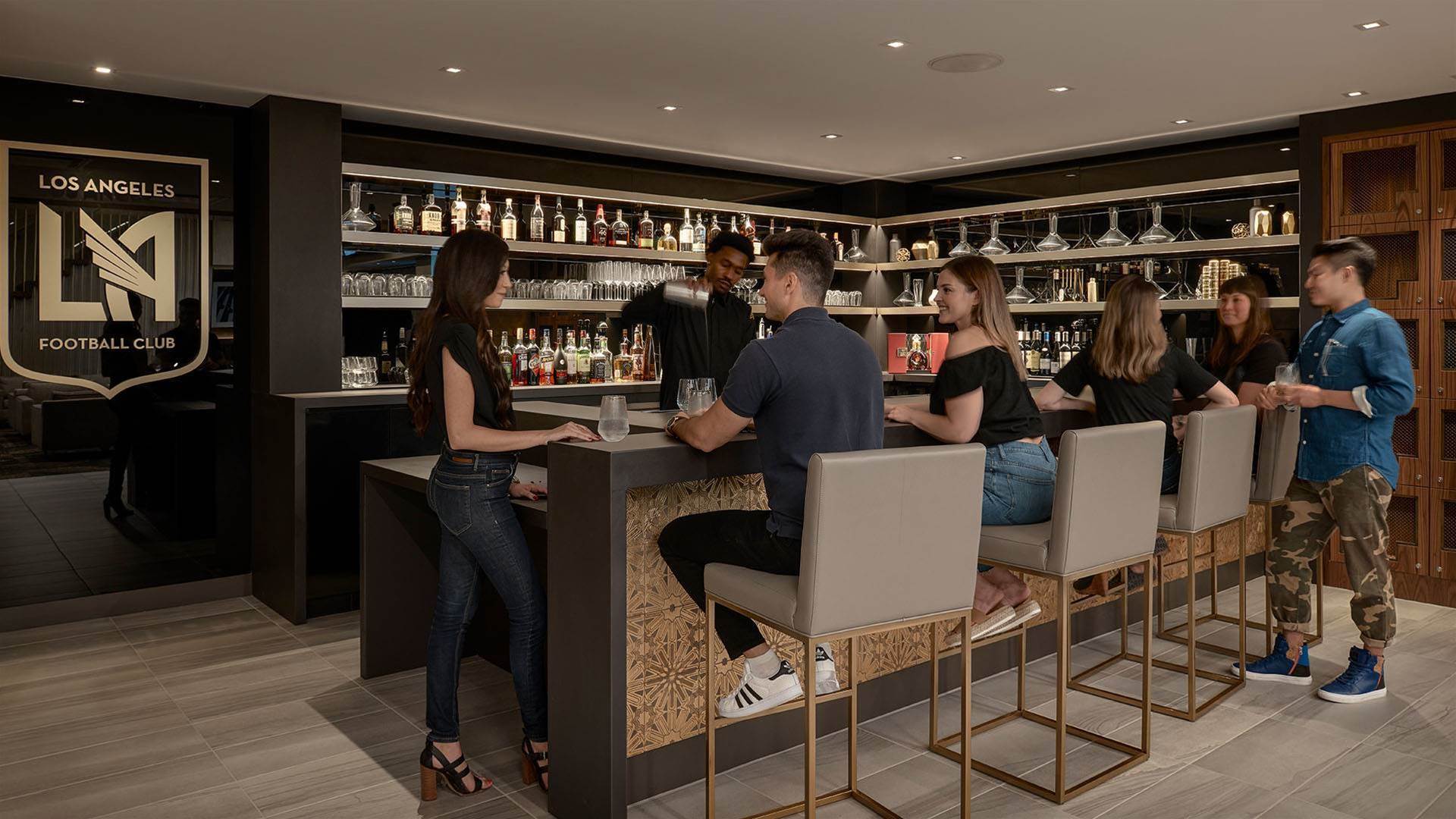 What’s more, it’s only US$20 for a spot inside the all-singing, all-dancing, LAFC supporter group with no signs of over-zealous security staff (how does that compare to your A-League club?)

Interestingly, a group of LAFC fans was guests of Borussia Dortmund before the club's MLS adventure began.

The Bundesliga outfit invited LAFC fans to the Signal Iduna Park to witness their "Yellow Wall" and gain insights into what it takes to build a fan culture in a league that has always put fans first.

In a nod to Germany, LAFC brought in beer jets that can fill six beers in seven seconds with extraordinary precision.

The beer jets are also used at the Allianz Arena in Munich, one of the world’s most eye-catching stadium designs.

The Banc stadium food comes from local LA restaurant partners that are already popular with LAFC fans in the city. 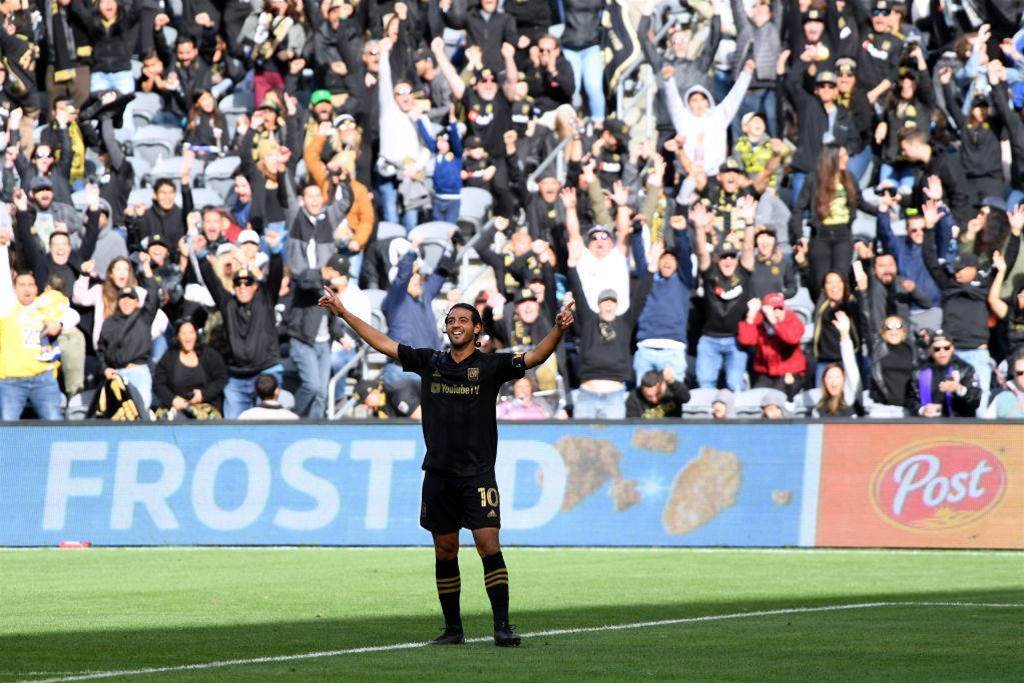 LAFC fans celebrate in an MLS game at the Banc

“We sat down with them [LAFC fans] to find out what they wanted from their guest experience. Everything from the bars to network connectivity" says Lau.

The Banc’s upload speeds are said to be excellent for posting live video streams.

“And we asked our supporters, you tell us what the club’s app needs to have. What you see today on the LAFC app came from the input from 3252.

“The app is highly specific, but it works really well.”

Their MLS app’s next version is currently in dev.

Debates about boutique stadia in the A-League have been going on for years. Lau says the "scarcity" factor of a 22,000 capacity stadium is a plus for LA's MLS outfit.

It’s a potent mix at LAFC.

Snap-fresh fan engagement, a smart-tech, boutique stadium experience are the cornerstones of LAFC’s success to date as a new MLS franchise.

LAFC (co-owner is SNL and movie comedian Will Ferrell) was announced in 2014. It gave LAFC four years to prepare for its MLS bow in 2018.

This allowed the fans' culture to sprout and grow well before MLS game one.

LAFC has dazzled in its first two years in the MLS before - like the A-League - COVID-19 shut down play earlier this year.

On the pitch, roared on by its “3252", LAFC from the Western Conference made it to the MLS finals in its first season in 2018.

LAFC signed YouTube TV as it’s front of shirt sponsor and the newly minted local derby against LA Galaxy has become one of the city's must-see sporting events an a major crowd drawer in the MLS.

CHECK OUT THE OFFICIAL MLS SITE FOR ALL 26 CLUBS

The MLS is much bigger in size than the A-League (11 clubs currently versus a staggering 26 in the MLS with more clubs in the pipeline) with new franchises such as LAFC sparking growth on and off the park.

Atlanta United, Inter Miami, and Seattle Sounders (who joined MLS in 2009 and is owned by another celebrity comedian Drew Carey) and others including LAFC have benefited from a strong expansion policy and vision at the MLS. 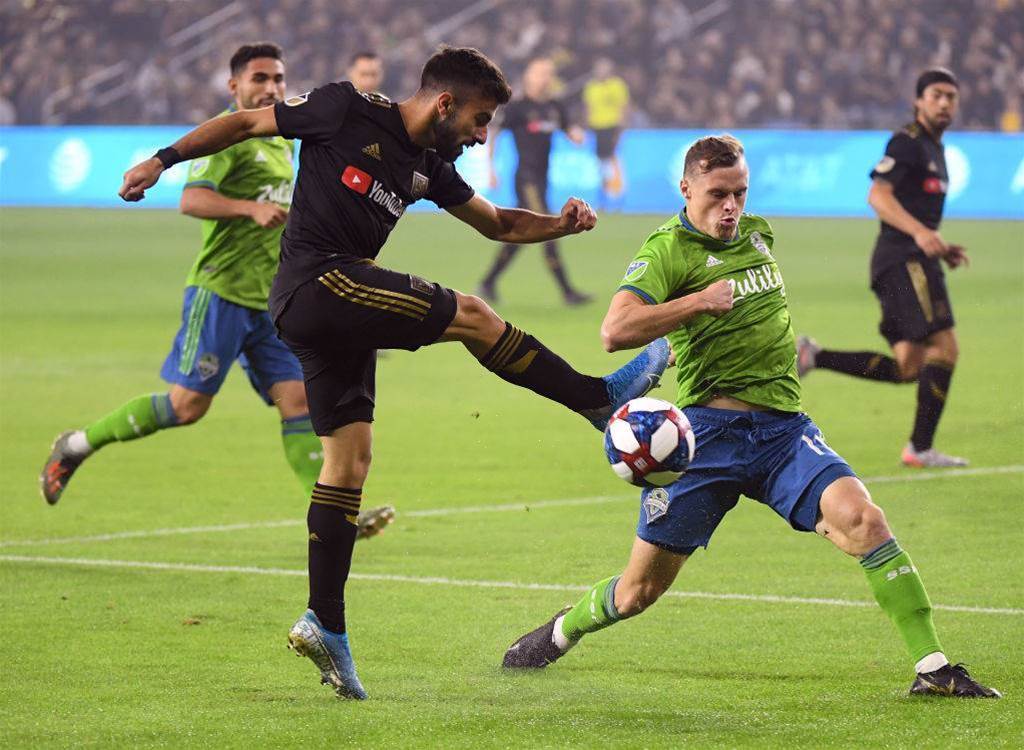 Socceroo Brad Smith (right) for Seattle against LAFC in the MLS

Furthermore, the MLS club is part of an LA sports task force that meets weekly for all sports in the city to help improve the fan experience and address stadia operating issues.

“We’re all in the same business,” adds Lau. “So we want to collaborate and have a unified front. We have to be cohesive.”

As A-League football seeks a way forward post-COVID-19, it’s time for our league - and its current and future clubs - to grasp the fundamentals of how to run a successful A-League club within each city in Australia.

"MLS has done a great job of curating the markets that we need to be in.

"All the markets the MLS are in are very logical and make a lot of sense. Inter Miami [co-owner David Beckham], we love those guys and we've collaborated with them.

"The league, the MLS, they got it dialed in, man."

For A-League clubs wanting to know how it's really done, LAFC would be a prime place to start.