Victory this morning announced they would be parting ways with Kurz after just 13 A-League games, the third-fastest sacking in A-League history.

Though the four-time A-League champions sit sixth on the ladder heading into their round 15 meeting with Adelaide United, their spot on the table says more about the relative mediocrity of the league this season than their own abilities.

Their four wins, three draws and six losses earned so far are well below the expectations the club sets itself.

Assistant Carlos Salvachúa, a holdover from the days of Kevin Muscat era, has been tapped to take over the reins of the club on an interim basis following Kurz’s departure, with fellow assistant and long-time Kurz collaborator Filip Tapalović following him out the door.

Fronting the media following the announcement of his now-former coach's axing, Di Pietro said that the club's decision was not a rash one and that both performance and results had been taken into account in making the decision. 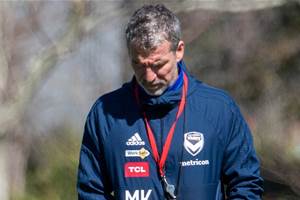 Melbourne Victory have sacked coach Marco Kurz and assistant Filip Tapalovic after the club's disappointing start to the season.

“We review performance and results along the way,” the Victory chairman said. “I think you have to be honest, we’re going to take our time in the process going forward and we’re going to look at what we did in the current process.

“The strategy doesn’t change, but appointments at times don’t work. What we need to do is continually look at performance and results but, in the process going forward, we have to look at how we can improve how we do that.

“We’ll certainly take our time to do that.

“We’ll take out time to review what we’ve learned in the process in appointing a coach.

"We’ve certainly sat here as a club as you grow and spend years building a club. I will say this, it’s wonderful to enjoy the success, the ecstasy of sport, but the agony is certainly just as difficult.

“Going forward, we’ve got to continually learn from what we do and we’ll spend the time… and time is going to be on our time this time around.

“It’s come down to can we make an improvement on where we’re at. We’re certainly not happy with where we’re at and this decision was based on improving that.”