Has the time come for John Aloisi to either step down or have his tenure terminated?

I, for one have been more reluctant than other fans in pulling the trigger. This is due to a higher threshold of patience and a belief that the removal of a manager is not always the best solution.

I sat in the stands at half time with my side two goals down to a Sydney FC who were outplaying us on our own home ground. I told my friends that if I didn’t see some sort of improvement or fight-back in the second half then I would join in the chorus calling for change.

Melbourne Heart have scored just two goals in six matches of football this season, that’s two goals in 540 minutes. Those two goals were scored within 10 minutes of one another back in round 2 against Central Coast.

When that statistic is combined with Heart’s very poor fade-out at the end of last season it is apparent that we have collected just two points out of the past 33 available. In a salary capped competition that is simply not good enough and fans have had enough.

The biggest cheer on Friday night from Yarraside came as David Williams hit a hopeful shot well wide on 86 minutes, the very fact that Heart had a shot at goal was the highlight. The official statistics from the night say that we had 12 shots for the match, as a fan at the match I sense the definition of ‘shot’ is being stretched.

There was no visable game plan and far too often hopeful long balls were heaved upfield often in the direction of the short-statured Michael Mifsud. When we did get into attacking positions crosses were directed into goal mouths vacant of any red shirts and shots were few and far between. 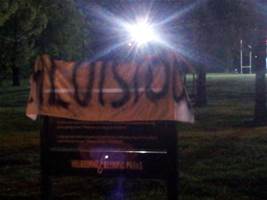 The fan’s frustration and displeasure was open for all to see with the sound of boos filling the stadium at the final whistle followed by a Yarraside chant of “Aloisi out”.

I have now joined these calls as I cannot realistically see where our next goal is coming from let alone our next points. Changing the coach may not solve these problems but Aloisi has had enough of an opportunity to make a positive impact but has failed.

We can point to injuries to high profile players such as Orlando Engelaar and Harry Kewell. However Engelaar was injured well before the start of the season and realistically Kewell’s fitness can never be relied upon. There is sufficient ability amongst the playing group to be higher up the table and they too need to shoulder some of the blame for the poor results.

However, for the benefit of the club who cannot afford to lose supporters from an already modest home crowd something needs to change. Abysmal away form was a serious issue which is compounded by two successive defeats at home.

John Aloisi was perhaps rushed into the top job. He has done some great work with the Youth League squad prior to the senior team so he still has a role to play at the club.

Perhaps current assistant Gerard Nus can fill the void. His coaching experience is substantial and although this is no guarantee of success, sticking with Aloisi seems to be getting us nowhere fast.