It seems that football books are very hard to sell in Australia. (Am I right Lawrie McKinna?)

They sell like hotcakes in England so what does that say about our respective cultures? You couldn’t say the football community in England was any more literate than we are, but maybe their dark and sleety weather behoves a more indoor culture?

Who knows, but I would estimate there are at least five million people in Australia with a direct interest in football (through playing, supporting or just watching). That ought to mean at least a million (I’m trying to be conservative) potentially interested in books on football as long as they were: entertaining, well written and informative.

Simon Hill’s autobiography – Just A Gob On A Stick (New Holland, 2017) – despite its vaguely unappetising title is all of these, and yet it has sold in appallingly low numbers.

So many biographies of sportsmen are unbelievably dull: “I grew up…I made the team…I proved the doubters wrong…” with little or no insight into the characters involved and their development. It's rare to find one with any sort of story being told, and most cease to be interesting as soon as the hero experiences his/her first success.

WIN A COPY OF GOB ON A STICK HERE

Simon, of course, is not a sportsman but he’s deeply involved in our favourite sport (for most of those reading this article at any rate). He is a journalist and therefore a professional storyteller, so I picked up Simon’s book expecting to be regaled with a series of anecdotes giving deep insight into the English media and English game (where he developed), the Australian media, the Australian game, and in particular, the Socceroos, FIFA and football politics.

I wasn’t disappointed. It was an excellent read and went far further than I hoped into all of these. I absolutely loved his anecdotes about the personalities behind the names in the game – life in the Championship, for example, must be horrific for a manager dealing with club and fan expectations on the brink of The Promised Land. There were excellent insights into that particular hell.

It was also a story of bizarre happenstance (as can happen in any career) – not least the way he wound up in Australia and then found his way via SBS to Fox. The backstage politics were fascinating as they interspersed his many years commentating on A-League and Socceroos matches. There were brilliant anecdotes regarding his calling of some of our key legacy matches, including Uruguay 2005, Kaiserslautern 2006 (Japan and Italy), Munich 2006 versus Brazil and of course Stuttgart 2006 versus Croatia where Graham Poll covered himself in something less than glory.

A regular theme (once he arrived in Australia) was his bewilderment regarding the antagonism towards football in this country. For most of us it’s a tired old story but it was interesting getting his foreign perspective. It must have been a weird culture shock, coming from a land where football sits unchallenged on top of the pile, to the land of Sheilas, Wogs and Poofters.

I’m surprised he didn’t get out as soon as he could! Not least as he was made to feel fairly unwelcome on the basis of both his football code of choice and ethnicity. Simon seems to have had numerous unpleasant experiences on the basis of his Englishness and believes Australians (and our use of the word Pom) to be generally negative towards the mother country.

Obviously, I can’t comment on his personal experience, but I suspect he’s misdiagnosed the mob’s view. Most Australians (those of Anglo-Saxon heritage, at least) take a fond view of the Old Country, but enjoy hiding that fondness behind a barrage of good-natured abuse.

For your real abuse, Simon, try reading some of the comments on British football forums when Aaron Mooy, or Mat Ryan, or Tom Rogic are away on international duty. The bitterness towards Australia and Australians can be breathtaking.

I also thought he was oddly selective as far his personal story was concerned, but that’s a small point – possibly down to the fact that he was being humble about his own relativity to the game, which is, after all, the real story. If I’d written Simon’s story I would have insisted on more personal dirt (but that’s because I’m nosy!)

Overall, this was a really interesting, thoughtful and enjoyable book and should have done far better in the shops. I don’t know whether Just A Gob On A Stick is still available but anyone who loves football and football stories (or knows someone who does) could do worse than to hunt it down. (You can buy it here - Ed.)

As for me and football biographies, I’ve done Lawrie McKinna and now I’m hunting Bozza. I’d also love to do you, Kevin Muscat, so get in touch if you’d like your dirty laundry aired (even more than so far).

Simon Hill has offered five copies of Just A Gob On A Stick to FTBL readers in Australia. If you would like to enter the competition, click here.

Adrian’s latest book The Fighting Man is in the shops right now or available through Booktopia. Adrian also wrote Mr Cleansheets and will have a couple of exciting announcements shortly. ​ 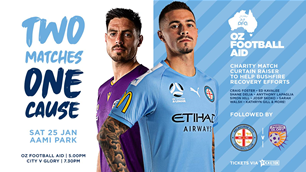