Paris Saint-Germain boss Carlo Ancelotti would be the ideal replacement for Jose Mourinho at Real Madrid, according to the club's president.

Ancelotti – who led PSG to their first Ligue 1 title in 19 years last season – has been linked with the vacant post at the Bernabeu after Mourinho left to rejoin Premier League giants Chelsea.
Real president Florentino Perez believes Ancelotti would be perfectly suited to the job, and admitted he had thought about offering him the job previously.
A stumbling block could be the fact Ancelotti is contracted in Paris until the end of the 2013-14 season, but Perez's comments hinted at negotiations with the French side.
He told Antena 3: "Ancelotti fits the bill at the Bernabeu. He's a magnificent coach that I've thought about hiring before.
"He's at a club with which we maintain good relations with and he has one year left of his contract. We're going to wait and see what happens."
Perez also revealed that sporting director Zinedine Zidane, a former player of the club, was keen on becoming a member of the club's coaching staff.
Zidane, who spent five seasons in the Spanish capital in his career, helping them to success in the 2002 UEFA Champions League, could also become the head coach of the club in the future, according to Perez.
"He's really enthusiastic about becoming a coach and I would love him to (become coach of this club), but I think he wants to work as an assistant coach first," he said.
"He will be here next week and then we'll sit down and look at the possibilities, but he wants to work as an assistant coach." 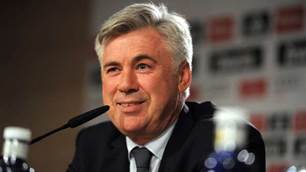 'Real Madrid is a dream for me' - Ancelotti