One of Australia's greatest coaching feats was achieved this weekend in Japan and Martin Boyle is coming close to cementing his Socceroos return with a brace for Hibernian.

In the English Premier League our Aaron Mooy and Mat Ryan were in inspired form as Brighton beat Arsenal 2-1 away at the Emirates. Mooy assisted Brighton's winner while Ryan had cat-like reflexes to deny Arsenal's relentless pressure. 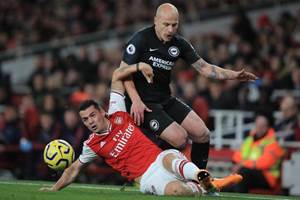 Mat Ryan and Aaron Mooy combined force to star as Brighton & Hove Albion snatched a stunning 2-1 win at the Emirates Stadium against Arsenal.

In the Scottish League Martin Boyle is back in the big time at Hibernian scoring a double in a 3-0 win over Aberdeen.  Oliver Bozanic was absent for Hearts' 1-1 draw with Livingston and an unused sub in a 1-0 loss to Motherwell.

Tom Rogic's Celtic came away with 10th Betfred Cup crown this morning. They beat biiter rivals Rangers in the final with the Australian an unused sub.

In the English Championship Jackson Irvine got an assist and Callum Elder played a full match as Hull City beat Stoke City 2-1 who had Adam Federici on the bench. Bailey Wright was absent from Bristol City's squad that beat Fulham 2-1 at Craven Cottage. Massimo Luongo was a 78th minute substitute for Sheffield Wednesday as they beat Brentford 2-1.

Kenny Dougall was an unused sub for Barnsley as they lost 3-2 to Cardiff City. It's the second week in a row Dougall has been unused. Australian goalkeeper Ashley Maynard-Brewer was on the bench for Charlton as they lost 1-0 to Middlesborough.

In League One action Harry Souttar played 90 minutes for Fleetwood Town as their five game unbeaten run ended at the hands of Blackpool, losing 3-0. Mark Milligan played a full match for Southend United in a 4-2 loss to Bristol Rovers.

Ryan Williams played 73 minutes for Portsmouth as they settled for a 2-2 draw at home to Peterborough United. Ryan Edwards played 90 minutes for Burton Albion as they lost 2-0 at home to Lincoln City.

In the English youth leagues Alex Robertson continues to shine for Manchester City scoring a hat-trick as City U18 thrashed Sunderland U18 7-0. Caleb Watts played 82 minutes for Southampton U23 as they got a great result, beating Man City U23 2-0.

Alex Robertson mirrors the skipper's example by completing his own hat-trick.

Jordan Harrison played 90 minutes for Watford U18 as they were knocked out of the FA Youth Cup on penalties to Fleetwood Town U18. Zak Gilsenan played 15 minutes off the bench for Blackburn U18 as they beat Wolves U18 3-0. 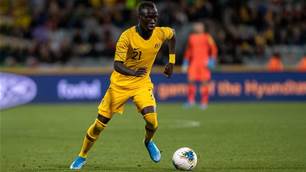