In the UEFA Champions League Milos Degenek played 90 minutes for Red Star Belgrade as they triumphed 3-1 over Olympiacos. Degenek's performance was lauded by local media after Red Star came back from 1-0 down. 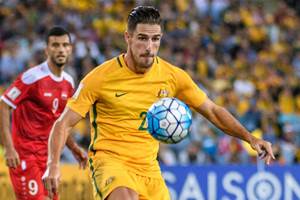 Socceroos defender Milos Degenek has been celebrated by the Serbian media after his performance in Red Star Belgrade's 3-1 Champions League win overnight.

In the Europa League James Holland was the only Aussie to play 90 minutes as LASK Linz lost 2-1 to Sporting Lisbon. Socceroo Tom Rogic was left on the bench for Celtic's 2-0 win over Cluj and Aziz Behich was absent from Basaksehir's team that drew 1-1 with Borussia Mönchengladbach.

In the Bundesliga Mathew Leckie played 11 minutes off the bench for Hertha Berlin in a 3-1 win over Fortuna Dusseldorf.

Brandon Borrello was on the bench as Freiburg jumped to second in the Bundesliga with a 2-2 draw at home to Borussia Dortmund.

John Iredale scored two goals and got an assist for Wolfsburg II as they smashed Heder 5-0. Iredale has scored eight in thirteen matches this season.


Great way to head off into camp with the National Team!🔥🇦🇺 2 goals and an assist. Good performance by the lads👊🏼 @VfLWolfsburg_EN pic.twitter.com/r9zWPrT2nQ

In Denmark Mustafa Amini played 90 minutes, Zach Duncan played 27 minutes off the bench and Alex Gersbach was an unused sub as AGF lost 2-0 to Randers.

Awer Mabil played 90 minutes for FC Midtjylland in a 2-1 win away to Silkeborg. Mabil had a number of chances to score but couldn't convert.

In Israel Nikita Rukavytsya scored again for Maccabi Haifa and played 83 minutes while Trent Sainsbury was absent as they beat Nes Tziona 3-0. Rukavytsya is top of the Israeli scoring charts.

In Austria James Holland played a full game for LASK Linz in a 2-1 win away to Hartberg. James Jeggo also played 90 minutes for Austria Wien as they defeated his former club Sturm Graz 1-0.

In the Netherlands Ajdin Hrustic assisted the first goal in Groningen's 3-0 win over RKC Waalwijk. Daniel Bouman was on the bench for SC Cambuur in a 4-0 win at home against Excelsior.

In Croatia Fran Karacic played 90 minutes for NK Lokomotiv Zagreb as they drew 1-1 with NK Rijeka. Anthony Kalik was on the bench for Hajduk Split as they defeated Varazdin 2-0 at home.

In Bulgaria Tomi Juric made his first appearance for CSKA Sofia in the league playing 13 minutes off the bench in a 4-0 win over Vitosha Bistritsa.