Western United’s 3-1 win over Melbourne Victory in Sunday’s Westgate Derby capped off a rather rotten end to a week that had started off so promisingly for the traditional powerhouses.

Just when it appeared as though Melbourne’s navy blue side were going to be able to create a sense of momentum after defeating Perth Glory in round eight, an interview in the Swedish press emerged revealing that captain Ola Toivonen was eyeing a return to his homeland at the end of his contract.

Though the striker said all the right words when questioned about the matter on Thursday, his careful word choice and tone indicated that Victory would definitely have their work cut out to keep him.

Compounding matters, hours after Toivonen spoke reports emerged in The Age suggesting the Swede was a key target for A-League expansion side Macarthur FC.

Then, on Sunday, Victory dominated every statistic except the one that truly matters as they went down 3-1 to United at Kardinia Park.

“Exactly,” a frustrated Victory Head Coach Marco Kurz said when asked if it felt like his side were now back to square one. “I think it’s good for myself and the boys to not explain what is in my head right now.

“The defending isn’t good enough and if you have 10 chances and you don’t score more than them the offensive isn’t doing enough.

“We are disappointed, and we have to change a lot to be successful in games. I think after this game I will need more than one day to watch again and again and to find hopefully the right decisions.

“We are disappointed, disappointed for our fans because we had fantastic support and if you score the first goal against a team they stay compact you must play a better part or a better game to get the points."

The shots on target count was seven to five.

However, a brace from former Vuck legend Besart Berisha combined with a strike from Panagiotis Kone to give the A-League’s newest side the three points and consolidation in the top four.

Just a week after the whispers around the German gaffer had subsided after the Glory win, it's likely that will now be back again in the wake of the result sending Victory to second-bottom of the table.

“I’m in the same boat as the players, I’m their boss,” Kurz said when asked if he was feeling the pressure. “Of course, my performance with the boys is not good enough.

“It’s not pressure that I’m feeling. I’m disappointed and I will be doing a better job for the club and our fantastic supporters. That’s where my energy is.

“The pressure, it’s part of the game, part of the job. If you lose games the pressure is higher but I’m long enough in the business.” 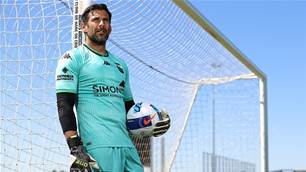