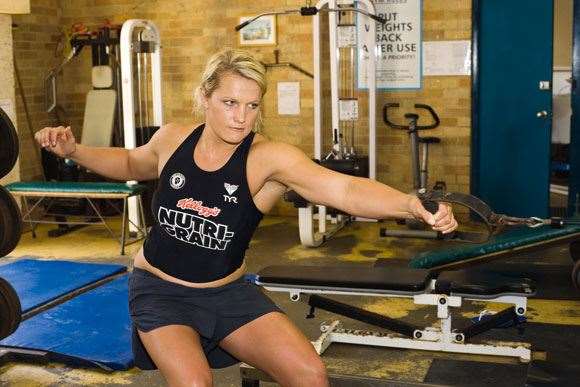 She’s 23, boasts a killer work ethic and last summer was crowned Kellogg’s Nutri-Grain Ironwoman series champion. It was the latest milestone in a long list which only dates back three years to her claiming the Australian Open Ironwoman championionship. Since then she’s added the NSW title to her resume, was named state captain in 2007 and in ’08 secured the World Ironwoman title.

All that’s pretty impressive, but she’s loved around Manly for a lot of other reasons, too. “She gives as much back to the local surf-lifesaving club as the club supports her,” one popular clubman whispered to us. “She’s the first to put her hand up if asked to do anything promotional, etc. If the nippers ask ‘Floody’ to talk to the kids, do a little skills lesson, she’ll be in it. Whatever’s asked of the girl, she does.”Here’s how Flood has been preparing for a revamped Kellogg’s Ironman series over recent months. It’s every man and woman for themselves this summer, which is just how Floody likes it.

“Everyone’s for themselves now. There are no region-based teams any more, which is good. It’s going back to the grassroot days of when Ironman racing was in its prime. I think it’ll be a really good series. They’ve changed it a bit by running individual legs. You do a board race, then you have a quick rest, and people get knocked out. You do a ski race, people get knocked out … It makes it a bit more exciting for television and makes the racing tighter … if it could be any tighter.“I think the new format will suit me fine. Then again, you don’t know for sure until you get to the starting line. It all depends on who’s done what training, who wants it the most and who’s the most mentally prepared.”

“I train at Manly Beach every weekday afternoon and Saturdays for a few hours. Monday through Friday, usually from 5-7am, I also swim at the Warringah Aquatic Centre, where I swim between 5-7km, depending on the time of year. This morning, for example, was an aerobic set – I swam about 5km before doing a bit of kayaking. My swim load changes depending on what day it is, too, whether I’ve raced on the weekend or what’s coming up [sprints, long distance, heart rate sessions]. My swimming is always of varying intensity. It keeps me guessing.”