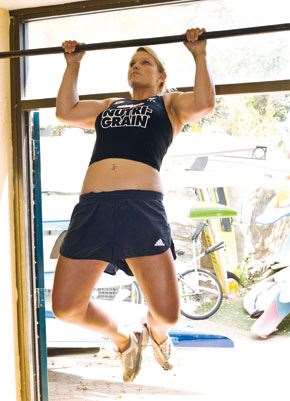 “I try not to do too much gym because it’s harder to recover before the next session. Usually I’ll do gym Mondays, Wednesdays and Fridays. The sessions can vary between 20-45 minutes. Anything more than that and I’ll have nothing left in the tank. I won’t recover. I just do enough to hurt and enough to get a good benefit out of it.“In my new gym program, I’m doing a lot of dumbbell and bench press work. We superset it: 12 reps, then we go into a push-up and a vertical arm raise push-up-type exercise. We’ll go 12, five push-ups at each angle, then we’ll go two 8s, three 6s and a 4, or something similar to that. You’re going up in weight and down in reps. Then we’ll superset a chin-up set: I’ll do as many chins as I can – full lockout, and then lat pulldowns. These have to add up to 20, so if I do four chins, I have to do 16 lat pulldowns, if I do ten chins, I then have to do ten lat pulldowns. “For the legs I’m doing cleans, snatches … not big squats, but kind of heavyweight squats at the moment. I’ve squatted up to 110kg – for about six reps. It’s pretty full-on. I’ve only been doing gym for about 18 months. I’d never done it before. I really enjoy it. It’s one of those things where I feel I can see a lot of improvement quickly. We only recently started this program – by next week I’ll be buggered as all hell. My fibres will be torn something severe. There’s kind of a two-week adaptation phase I find that I go through. “I’ve been swimming since I was six and it can take me six-to-eight weeks to go half a second faster – and that’s swimming five-seven kilometres every day. Gym’s been really good for me. I’ve become a lot stronger and it’s changed my physique a bit, so I must be doing something right.”

“My coach is Trent Herring. He takes me for every one of my personal training sessions which focus on the Ironwoman series. He takes me boxing, we do gym together … He doesn’t come to the pool in the mornings because I have another coach for swimming – Ben Davies. He corresponds with Trent and discusses what session I’ve done the night before; if I have a hard session on Tuesday night, Wednesday will be bit easier for me, like a recovery session. I don’t know how they work it out, but it seems to be working at the moment. Trent’s one of the Surf Club coaches. He and Sean Kenny coach the whole senior crew at Manly.“The support network I have is really good. The Manly Surf Life Saving Club supports me all the way. Everyone comes to watch me race when the events are on in Sydney. They all dress up in ‘Flood Warning’ gear and make signs. It’s really exciting.“My mum Karrin, dad Kevin and brother Simon have been really supportive; I couldn’t have done what I’ve done and got where I’ve got to without them. They come to all the races with me. In golf you have caddies – well, Dad’s like my caddie.”

“Even though it’s an individual sport, I also train with a big squad of guys and girls of varying ages. In my swim squad, for example, there’s 11-year-olds through to 45-year-olds. We’re from all over different parts of the northern beaches and the north shore of Sydney. We’re from different sports, too: there’s water polo players, pure swimmers, surf-lifesavers, triathletes … It makes it pretty interesting. The size of the group can vary between ten people to 40 people. It’s the same down the beach, depending

on what the weather’s like, what the surf’s doing, whether it’s holidays or not. You can get anywhere between five to 40 people out on the water.“It’s good for me because there’s always someone in the group to chase, someone to try to pace myself off, someone to try and peg back.”

“I do a pure board session on Mondays. I might do a five-minute blast at 80 per cent, two minutes at 90 per cent twice through, and then some really short, sharp stuff off the beach. Sometimes I’ll do longer stuff like eight four-minuters, just building,building. My board work’s mainly intense, explosive work, but you need a big base for board paddling, swimming and ski paddling, so in the off-season I clock up a lot of kays, getting a lot of mileage into the arms and legs. As it comes back into racing season, I shorten it up a lot, trying to get a bit more explosive, getting those fast-twitch fibres working.”