Oldham have admitted the debts despite bringing in five new players since Kewell joined the club as manager a few weeks ago, with most of the transfers loans.

The Oldham Times reports that seven players are currently in a wage dispute with the club and controversial Latics owner Abdallah Lemsagam.

The disputes centre on how the club have dispensed the UK's job retention payments - their version of JobKeeper - throughout the crisis and have now involved the UK's PFA.

Oldham have denied that the current complaints mean the club have been handed a transfer embargo, which could seriously impact Kewell's pre-season preparations.

“The club has since (the first three months of the year) put in place enhanced financial planning processes within its cashflow management to improve this situation," the club said.

“This is especially important due to the sustainability rules which will penalise clubs for late salary payments, and the club recognises that it cannot afford to infringe these tighter rules in future.”

“The club has not had any communication from the EFL placing the club in a transfer embargo, although it did receive warnings as a consequence of the late payment of wages in January, February and March,” the response read.

“The club has been careful not pay wages late subsequently.”

Oldham lost their most recent friendly 1-0 to Rochdale, Kewell's first loss as manager. 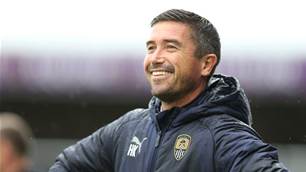