The two year contract extension will keep Watts with Southampton FC until 2023.  Watts first arrived at the Saints' academy in 2018-19, after having progressed through the youth ranks of Queens Park rangers.

He has since progressed through Southampton's U-18, U-23 and B team ranks.  Watts made his Premier League debut last season, coming on in the Saints defeat to Arsenal FC in January.  The defensive midfielder made two more appearances in the 2020-21 Premier League campaign and also made one appearance in the FA Cup against Shrewsbury.

Senior debuts for two of our youngsters! 😇 pic.twitter.com/tHRr8LPzIt

"I’m really pleased to get the deal signed and can’t wait for the next stage of my career now.

“The club has a great track record of developing players and obviously I can benefit from that. So hopefully I can get into the matchday squads again and continue that tradition.

“It was exciting to get into the matchday squads and play within two or three months. It’s a lot of motivation to show the manager you’re good enough, you just have to show it consistently.

“I just want to pick up as much senior experience as possible, try and get into the manager’s plans and see what happens.”

Watts is considered one of the biggest prospects within Southampton's current academy. He is being touted by some as a possible future replacement for current Saints midfielder Oriol Romeu.  Southampton academy Director Matt Hale said the following to the Saint's website upon Watt's contract extension:

“Caleb has been a consistent and strong performer for our B Team this season.

“He is someone we think very highly of and through a really robust individual development plan which we have in place for him, we believe can go on to achieve great things with us.

"He has had some excellent experiences so far in his young career, not least representing his country in the recent Olympics in Tokyo.”

The young midfielder was born in England to an Australian father.  Watts has represented Australia at several levels and was part of the Joeys squad for the 2019 FIFA U-17 World Cup and the Olyroos squad this past Tokyo Olympics.

Speaking to Southampton FC's Youtube channel last may, Watts spoke about his decision to represent Australia:

"I really liked what the coach when he came to visit had to say. We had the World Cup coming at the end of the year so I thought that it would be a great opportunity.

"Also there is a lot of national pride playing for Australia, making my grandparents proud and making my dad proud.

"I feel affinity for the country, probably more so than I do for England.  For me it was a great opportunity that I really enjoyed." 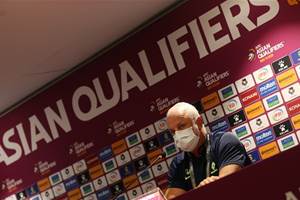