The 34-year-old  Ord cut his coaching teeth with one of the most respected youth coaches in Australia, Perth-based Kenny Lowe.The pair worked in the state’s NTC system from 2008.

But after doing his A Licence in Australia under Kelly Cross, Ord took Cross’s advice about learning from the best in order to become the best.

After leaving Australia in 2010, Ord has had coaching experience in Thailand which, in turn, opened up a recent spell observing Atletico Madrid, the club taking it to the big two in La Liga (see a separate feature on Atletico in the new issue of 442 mag

Ord's also spent time with Villareal as he learns more about Spanish football and in Portugal with Sporting Lisbon. Ord believes coach education is very important. He spoke with us today.

What have you seen at Atletico Madrid that you can take with you in your coaching career?

They are not re-inventing the wheel. Kenny Lowe is doing the same things with players in Perth. The difference is they have great facilities and good players. The vibe around the place is very close knit as Diego Simeone has brought in a lot of people that were part of the title winning team when he was a player. Team spirit is outstanding and he has moulded the team in his own style. The players will do anything to win and are really hard to beat.

They defend quite deep and keep it tight not conceding many goals then try and hit teams quickly on the break. Up front they have Diego Costa who is going to be a massive star. He is a match winner and at times unplayable. He can hold the ball up, dribble at speed, shoot with either foot and is dangerous in the air. Again it’s made me understand that being a good coach is only one part of the package; being able to get players to sacrifice for each other and work so hard that they are fitter than the rest is still an important part of the puzzle. They sold Radamel Falcao in the off season but have proved that the team is bigger than any individual and have improved. Staff and players are all in it together and it’s a great time to be part of the club.

Going back to the start, you were coaching in WA with Kenny Lowe and Glory youth. Describe that experience and why do you think WA produces so many talented younger players?

I was very lucky to be involved with Kenny and thankful that I was able to learn off him as without doubt he has been the biggest influence on my coaching career. The amount of players he has developed from a relatively small talent pool that are now playing professionally is incredible. The truth is its 90% down to him; if he went into a different State he would produce the same results.

There is a lot of talk about playing like Barcelona and 'tika taka' in Australia at the moment. Apart from Ange Postecoglou who got Brisbane playing that way the best exponent of it is working at NTC level and I really would have thought one of the A-League clubs would have Kenny as Head coach by now.

Working with Gareth Naven at Perth Glory was excellent, I developed a close relationship with him as we thought alike. His work ethic is phenomenal and he is the type of guy you never want to let down as you know he will do everything to fight your corner for you and players will play for a person like that.

You mentioned you’d spoken with Kelly Cross and he’d said learning from the best is important? Agree? Why?

Kelly was my instructor on the A Licence course and he had very good presentation skills. He really opened my eyes to improving players with video analysis to back up what you are trying to get across on the training field. One thing that stuck in my mind was that he said "if you want to learn take ideas from the best" and that always stuck in my mind. I now download games from Bayern Munich and FC Porto as the styles of these two teams represent my philosophy and i try to show them to my players to complement our training sessions.

After WA, you went to Thailand. Overall, as an environment for a coach, how would you describe Thai football?

Thailand has been a positive experience for me. It allowed me to work full time as unfortunately in Australia NTC and Glory youth were part time programs. I was working two sessions a day most days with my team with only one day a week off so you really get chance to implement your ideas and that shows in how you can get your teams to play. The fans are great, extremely passionate it probably resembles what Western Sydney have at the moment. The technical level of the players is high but there are some negatives. The culture is very relaxed and players would not show up for training or come late and they dont understand it’s not professional as no one holds them accountable. Also corruption is a problem and management try to interfere with team selections so it’s very demanding;  you have to be strong and diplomatic at the same time. It’s actually very difficult to explain how hard it is to work in these conditions unless you experience it yourself. Ultimately, though, the process has definitely made me a more rounded coach.

Did you cross paths with many other Aussie coaches?

Phil Stubbins has had a few stints out here and must have wondered what the hell he had got himself into when he first arrived. I remember playing against his team and he told me his club knew they were in transition. He had only been in the country a few weeks and I didn’t know him well enough to say there is no such thing as that in the Thai Premier League results are demanded instantly.

A couple of games later he lost his job which was crazy; you cannot judge a coach on six games. He then came across the same situation again and maybe had seven games. It’s a crazy place; you need to have the rub of the green and luck certainly plays a part. He is a fighter though, he didn’t let it get him down and has done a great job saving a team in Division One headed for certain relegation.

Name one or two players you coached in Thailand and your experiences coaching them.

You are allowed five foreign players over there and without doubt some of them would do a great job in the A league. I signed a Brazilian called Cleiton Silva from another TPL team after he had fallen out with the coach. Everyone said to avoid him as he was hard to handle and big headed but after talking to him I realised he was frustrated and just wanted to do things properly and win. He has since scored 42 goals in 60 league games and is still only 26 years old. He can shoot with both feet and score headers but he needs to be loved and build a team around him which is not always possible.

I also took a midfielder called Arzu from Spain who had been captain at Real Betis. He was a thorough professional and a very humble person. It made me realise that good players do the basics well and make the correct decision nearly every time as his game was pass and move he never did anything flashy but his quality and weight of pass was fantastic.

Also through his agent Arzu opened up doors for me in Spain to go into Atletico Madrid and Villareal to learn from the best, as Kelly Cross put it, which has been invaluable.

You were involved with the Thai national team. What did you do for them and how was that as an experience?

It was just for a couple of months for the Suzuki Cup which is contested by South East Asian Nations. I did the video analysis for the Head Coach Winfied Schaefer. He was very experienced and had won the African Cup of Nations with Cameroon a few years earlier but wasnt so good with computers and asked me to help him. I broke down opposition games for him and also edited Thailand's games and presented to the players. Its good to work with people who have achieved as he had been in the UEFA Cup final as a player and a coach and you pick up valuable information.

You were replaced at club level by Sven Goran Eriksson, despite doing well at your Thai club. What happened?

I was youth team coach at BEC Tero and we won the Under 20s competition. The 1st team had a poor season and finished 9th so i was given the opportunity to be Head Coach. The target was top 4 as we were miles behind them and we promoted a lot of the youth team and our foreign players we brought in really did the business. We were in 2nd after 8 games and the place was buzzing but expectations got out of hand. We finished the 1st leg in 3rd place and I noticed Sven at a couple of our games as the club president was well connected in show-business so I never thought anything of it. However we went on a run of lost, draw, lost and I was out and Sven took over. It was a ruthless introduction to the cut throat realities of 1st team football but I met him after that and he went out of his way to come and talk with me and was polite. He left after only 2 months for a big contract in China and since then they have had 3 coaches in a year and are back in mid table obscurity again so maybe you have to be careful what you wish for.

What’s the future for you?

I would love to be back coaching in Australia as I think the game is making great strides. It’s just so difficult with only nine professional teams opportunities are limited. I just need to keep working hard, gain more experience and be ready to take my chance whenever it comes along. 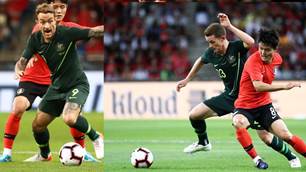