Gordon Strachan reflected on a "dream" night as Scotland beat Macedonia 2-1 to move off the bottom of their FIFA World Cup qualifying group.

Watford's Ikechi Anya, making his first international start, starred for Scotland and put them 1-0 ahead in the first half in Skopje. Jovan Kostovski equalised for the hosts before Shaun Maloney got the winner with a sublime curling 25-yard free-kick in the 88th minute.

The win moved Scotland above their opponents in Group A and ahead of Macedonia and Wales, who were beaten by Serbia.

Strachan's side now sit in fourth position in and the former Southampton and Celtic manager was delighted, not only with the result, but also with the manner of the victory.

"To win and play football like that was a dream," Strachan told the BBC. "We'll get on the plane (home) very happy.

"What a wonderful night - great football, no failures and the fans have enjoyed themselves. Let's leave it at that.

"I'm extremely happy for the players and I thought they were terrific.

"A draw would've been hard to take and it was hard to think how you would win a game on a surface like that."

Scotland, with two wins in qualifying, host Croatia in their final group game next month and will be looking to continue their improved form against a side they beat 1-0 in June's reverse fixture. 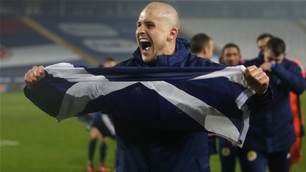 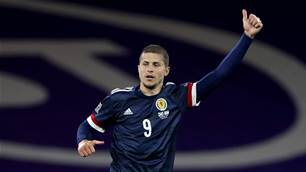