A Socceroo outfit without Craig Moore holding our back four together? We’re still getting used to it, since his retirement from the game after last year’s World Cup. 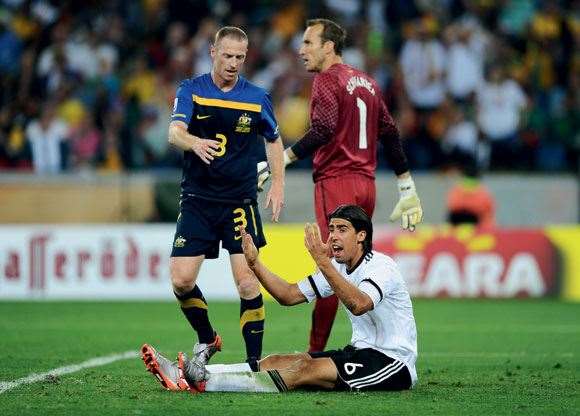 But at the age of 35, this arguably unsung hero can hang up his boots with undiluted pride, even if it’s the flashy midfielders and strikers who have tended to capture most of the public’s attention. Moore’s steady, hard-arsed composure while defending against the most glamorous names in world soccer saw him play all around the world. He made 52 A-International appearances for the Socceroos and also led a Glasgow Rangers side to numerous trophies in the Scottish Premier League over a decade. He returned to finish his career playing two seasons for the Brisbane Roar, before a controversial departure saw him head for Greece, then make South Africa 2010 his swansong. Arguably, there’s no more respected player in the game in this country, no footballer in the world more professional, and few more honest players in their assessments of their own performances. Which made him a natural selection for a few drinks with Inside Sport.

What are you missing most about professional football – other than the money?

Certainly not the injuries! I don’t even miss the football so much ... I do miss the routine of being involved with a football club, but I still kick about socially with mates. I play in a midweek competition for over-35s.

They love it – I’ve been doing it since then. I’d retired and a mate asked me to go down and have a kick about. There’s about 700 blokes who play in this comp on the Gold Coast and it’s just fantastic to kick about with people who love the game. It’s a social thing – people want to make it to work next day, so there’s no crazy tackles, and you have a few beers with the boys afterwards. Again, if I’m honest with myself, the one thing I really miss is the routine, and I’ve found that hard to replace. I’m certainly not watching games and wishing I was out there – that side of it has gone for me.

How’s your health? You had a big cancer scare there a couple of years ago. That must have been rough?

It came as a complete shock. But I was very lucky. It was an aggressive type of tumour but we caught it early. I undergo tests every three to four months; the scary part was the first two years because there was a 50 percent chance of it coming back. And I’m through that period now.

Did your fitness play a part in your recovery?

It may well have. At the time it was quite difficult. You go into denial a little bit. I remember when I was seeing my doctor, I was like, “Will I be okay to play on the weekend?” And he was like, “Listen Craig, we’re dealing with something here that’s quite serious, and my advice is to forget what’s happening on the weekend until we get this sorted.” And that’s when it really hit home. But after the operation everything went well. I think I played ten days later.

I see you were down in Melbourne recently for the Alex Tobin Medal presentation to Mark Viduka. Your career pretty much parallels his ... Is this another case of a showboating striker getting all the glory while defenders do the hard yards for not much recognition?

Well, you’re never going to hear me say that ... Okay, I agree with you (laughs). Strikers tend to get the limelight; they get paid the big dollars to score the goals, and us defenders are just expected to go out and stop them. But that was very well deserved for Mark. He’s had a fantastic career. We’re exactly the same age; we both went through the Institute of Sport together in ‘92. Josip Skoko was another who went through at that time; John Aloisi as well. We had a great bunch back then.