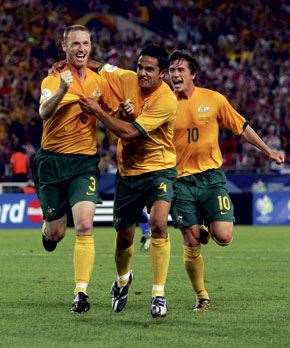 That one Japanese goal in extra time in the final – you would have got your noggin on that cross, wouldn’t you?

David Carney has come out and put his hand up and said he made the wrong decision ... Space doesn’t score goals, and there was nobody in that near post area for him to cover. Carney had to stay with his man. Don’t get me wrong, it was one of those things. The boys did extremely well and we really dominated that final, and it was really a tough one to take. For a few of those boys it might be their last chance to lift some silverware.

I’ve read over the years suggestions that the star egos in the Socceroo team tend to clash a bit, that they’re not the greatest mates. Is that a true picture?

Nah. No. If you’d asked me that two or three years ago, potentially there looked like there could have been a few people getting ahead of themselves ...

No, not so much – more competitive for marketing opportunities rather than what they do on the football field, and for me that’s certainly settled down and this squad has been a tight-knit squad. Sure, there’s players who keep themselves to themselves, and then there’s players like me who want to be involved in everything.

Harry Kewell’s been one of those blokes who falls into the “keep to themselves” category, hasn’t he?

Harry’s certainly not a loner – I’ve got on fantastically well throughout my career with Harry. But he is a type who feels comfortable with certain people and maybe not everybody, and at times maybe a little standoffish, but the way he’s been he’s had to protect himself from a very young age from people who he maybe thought wanted to know him for the wrong reasons. But he doesn’t think he’s a superstar. Not at all.

He’s copped some serious criticism on blogs and from certain journos, I reckon without a lot of regard for some of the injuries he’s had to carry and deal with. Agree?

The thing is, unfortunately, every time you cross that white line the fans just think you’re 100 percent fit because you’re on that field playing, not knowing the details that maybe you’re carrying an injury and there’s a lot of pressure for you to be out there, maybe from your manager. I’ve been in the situation where I’ve been at Rangers where you’re carrying injuries and felt that maybe you should be sitting that game out, but the pressure was on. Don’t get me wrong: you had to want to do that for yourself, but the flipside is that if you go out and struggle, people don’t know that you weren’t 100 percent fit. They just think you put in a bad performance.

You left Brisbane Roar pretty dramatically last year when the new coach, Ange Postecoglou, came in. What happened there?

We have no problems whatsoever. I was the first person to congratulate him on the way the team’s gone this year – he’s done an exceptional job. I guess there was a time there where I was a bit unhappy with the way things were going. Just in general at the club. For me to go to the (2010) World Cup, it was always understood I’d have to go and play overseas to stay in condition, and the way the Brisbane Roar came out and said it was either “me or Ange Postecoglou, take it or leave it”, all those sorts of things, I was disappointed. Apart from not lifting a trophy, I had two very good years there. We were always there or there abouts ... They could have said, “We understand his passion to play in another World Cup and we’re supportive of him leaving to play.” That way they come out of it well.

No, they didn’t. I can guarantee you I have left every club on good terms, looking the right people in the eyes, shaking their hands and saying thanks very much, and then within a day or two seen all sorts of carnage in the newspapers. That’s happened four times to me. Anybody who knows me knows I’m a straight shooter – it’s not like I’m difficult to deal with, but I certainly won’t be ducking and diving behind people’s backs and talking rubbish. I’ll speak to them directly and look them between the eyes, and all those clubs I left on what I thought were good terms. Unfortunately you cannot control what’s said later. And a lot of people, influential people at those clubs, they’re saying things to make themselves look better or give the fans a side they want to hear ...

And the Roar made you out to be the bad guy?

Well, yeah. I mean, even before Ange came they were trying to say it was a boys’ club, that [coach] Frank Farina used to come down to the Gold Coast and play poker with me. I saw Frankie the other day at an exhibition match up in Townsville, and we had a little chuckle because that is the first time I have ever seen Frank Farina outside of football. In my whole career. I worked under Frank for the national team, and obviously at the Brisbane Roar, and Frank Farina has always been a manager who’s there at training, there on match day, but you’d never ever see him outside of that. He’d never ever mingle with the players. Never. So hearing stories from our chairman that Frank Farina is down playing poker at my house, I said, “Mate, you don’t even know your own manager.” I don’t dislike anybody. At first there was a little awkwardness with Ange, but I went up and shook his hand and it just broke the ice and he realised that I certainly don’t have any issues, and I know that he doesn’t have any issues with me – we’ve spoken on quite a number of occasions since then. I’d also certainly help Brisbane Roar players in any way, for any reason. My time at Brisbane Roar was a success without lifting a trophy. The club was a great bunch of people.