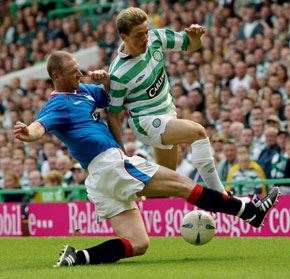 More Craig, this time at his defensive best for Rangers, vs Celtic, 2004.
Images: Getty Images

Well, let’s hope you get your name on that medal sometime soon – one for the defenders ...

It’s nice to be rewarded, but that’s never been my focus. In that respect, Mark and I are a bit alike – he never felt the need to come out and announce the big retirement. I was very similar. I know what impact I had on the game. I know I had a good career. I don’t need people to pat me on the back.

You’ve played under a pretty impressive list of coaches over the years. Whose style would you be most likely to fashion yourself on if you were a coach?

I think Dick Advocaat. I played my best football under him at Rangers, for sure. He demanded a lot which I enjoyed as a player. I loved having a manager who really pushed you and tried to get every little bit out of you.

He was a hard man?

Yes, he had extremely high standards. The training sessions were all very detailed, and I’m a big believer in the way the Dutch play football as well. But it was a bit of a love-hate relationship for a while. He took me off after 23 minutes during the very first league game I played under him, because I’d made a mistake and we’d lost a goal: a cross had come in and I was expecting it to bounce and clear it with my head, but it didn’t bounce high enough and they ended up scoring off it. And he took me off after 23 minutes. On the Monday he said to me, “Look, if this is the standard and this is what you’re going to give me, I’ll just go out and buy another central defender.” And I turned around and said, “No problem, you go out and buy another central defender. But I’m just telling you that I’ll be the one that’s playing.” And he said, “That’s exactly what I wanted to hear. Good boy, see you later.” Hiddink was the same. Top Dutch managers get in and test your character – they see if you’ve got what it takes mentally.

What have you been hearing about Holger Osieck. Is this bloke the goods?

I think so. I’ve not spoken at length with too many players, but if there were any chinks in his armour, we would have heard about it. In football you hear the little rumblings. But everything I’ve heard has been extremely positive. He’s apparently quite old- school in his type of management but he’s certainly getting the best out of players, giving them confidence; he lets them express themselves and apparently he’s just a really good guy who gels well with the players. I would go so far as to say that at that level, 70 percent of coaching is man management.

I got on really well with him and I thought every player got on well with him. It’s just one of those things – he was in for a certain amount of time, he got us qualified for the Asian and World Cups, and I think his time was a success as a manager. Holger’s now come in and he’s done a good job.

Were you sitting up in the middle of the night watching all the Asian Cup games?

I watched them all, yeah. I thought we did enough in the group stages without being overly impressive. We huffed and puffed a little bit. The results certainly could have been different. Uzbekistan was an absolute whitewash; we destroyed what I thought going into that game was a very, very good side, but we made them look extremely average – full credit to the lads. Then the final ... Unfortunately we play a game where you can dominate field position and possession, but at times it doesn’t count for a victory. In virtually any other sport it would.