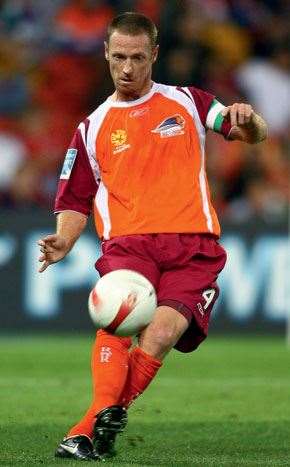 It has to be the whole experience of the 2006 World Cup. We went into the unknown that time – the first time we had qualified in 32 years, and I don’t think anyone really knew what to expect, and then it was like a complete dream the way everything went. We obviously started off well against Japan; the result against Brazil I don’t think anyone expected, but we certainly didn’t let ourselves down; and before the tournament we said if we had the opportunity to play Croatia to qualify through that group stage, we’d be really happy with that. And that evening was one of the best evenings, and I’m reminded of that for the rest of my life because I’ve got a big massive picture in my games room of me after I scored the penalty and I’m running away and you’ve got Timmy Cahill and Harry Kewell and both of them look like they’re crying.

The 2010 World Cup was very enjoyable, but in a different way. The expectation this time around was different – our group was tough. We got off to a bad start against Germany, but thankfully our following two performances were massive – and really needed to be because I was concerned after the German game.

Was that an aberration?

Yes, we did change our formation to play a 4-4-2, which hadn’t been done under Pim for some time, if at all. Apart from that, I purely put the blame on the shoulders of the 11 men who were out there, because we certainly didn’t perform. We’re normally very well-organised as a team, and for whatever reason that day we had 11 individuals out there. And we were lucky we got beaten 4-0 when it should have been 8-0.

They were rampant; they could pick up the ball at any stage of the field and have that much space and time. We looked quite clumsy and badly organised  defensively as well – you end up forcing offsides and you’re putting your hand up and not getting back and that doesn’t look great either. In the end you’re guessing because they’ve got time to put their heads up on the ball and they’ve got numbers going forward ... We didn’t get close enough, we didn’t cause them enough trouble. Though for the first three minutes I thought we were fantastic (smiles): 2-0, I would’ve taken that on the chin. But we still didn’t have the right mentality to say that that was enough. I looked up at 70 minutes and saw four-nil and I thought this is going to be seven or eight ...

Out of a terrible performance, the reaction that we had was to produce the following two really good performances against Ghana and Serbia.

So how do you fill your Saturdays these days?

I’ve set up a business, a franchise called Viva Soccer. Basically I’m just trying to encourage kids between the ages of 3-11 to play the game – I just feel there’s a lot of people out there who focus purely on the academy-type setup, and that’s only five percent, and maybe only two percent of those make it. I’ve had many meetings with the FFA and hopefully they’ll endorse it. We’re not working at the moment with football clubs because unfortunately there’s a lot of politics involved. For me it doesn’t really work. To be a viable business opportunity we have to get involved with schools, and that’s been a huge success. We’ve sold five franchises, one in Melbourne, one in Cairns, three here on the Gold Coast. My aim is for it to be all over Australia sooner rather than later.

Any coaching ambitions at the elite end?

I wouldn’t rule that out. I’d love to be in a position where I could have an impact on Australian football – I still think there’s a lot of work to be done. Every state seems to have a different system and until we have one system in place through the country we’re up against it. So there’s certain roles I can see myself playing – maybe even help out structurally to get that right system in place so the pathways link, just to give the players the best chances.